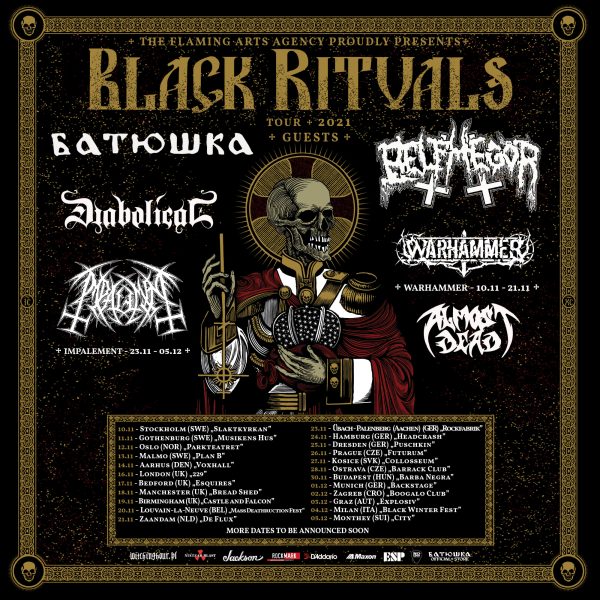 Nestled down an unlikely side street just off Great Portland Street, the beards and bald heads of the London metal scene begin to gather outside Venue 229. Omitting a pinkish glow, with stylish exposed brick interiors, although this venue has been around for well over a decade – it seems to have been left off the extreme metal circuit in the past few years. Cue, the Black Ritual tour.

Down the stairs we go, into the pits of hell, if you will. Diabolical takes to the stage later than expected and have a shortened set as a result. The Swedish wizards have a wonderful concoction of soft, melodic interludes and riff-heavy breakdowns that creates an emotional and turbulent experience. And yet with tracks such as ‘We are Diabolical’, they also manage to create music with fun, fist-pumping opportunities (always welcome). This is not a band that easily fits into a particular genre. The Swedes transcend expectations by transporting us to unexplored realms.

As the Londoners grab the next beer and deliberate over the wall of merchandise, the stage begins to be dressed. Highly elevated, this platform lends itself well to black metal theatrics. Inverted crosses straddle the stage in this unholy ceremony as mist begins to flood the room to an orchestral soundtrack. It’s grand and aristocratic.

Belphegor vocalist Helmuth stands proud and furious, launching us into the explosion of sound ‘Swinefever – Region of Pigs’. Helmuth is a fascinatingly ferocious frontman, stiffened as though possessed, face contorting as though in agony, as though consumed by a demonic force. The crowd is wild, the high stage lending itself to crowd surfing, but without the usual barriers at London’s larger venues.

One unlucky staff member finds himself regularly running out onto the stage, kicking the surfers back down into the crowd. He eventually comes into the pit himself, attempting to single-handedly stop the feverish Satanists from reaching their musical Lucifer. This is fuelled further during ‘Hell’s Ambassador’, with Helmuth spectacularly bearing the flaming horns of Satan above his head. Belphegor knows their role and its importance in this particular Black Ritual.

Another break. Another beer. The final decision is made between purchasing that black t-shirt, or that other black t-shirt. As we witness the slow set change, for it really is a set change, the room comes yet more theatrical and more extreme. The smell of incense fills the air.

A hooded figure lights candles and sprinkles unholy water upon us. A black blessing. The rest of the hooded figures take their positions. Three stand together near the back; the backing singers from hell. Batushka’s frontman takes to his pulpit, raising his deathly texts, ready to begin the blackest of rituals. The ambience is somewhat dispelled by a few attendees remarking ‘get on with it.’ Of course, as anyone who knows anything about Batushka will tell you, this is it. Perhaps these particular metallers struggled to adjust to the change in pace, following the chaos of the more animated Austrians.

We launch into the haunting chants of ‘Irmos I’, taken from their EP Raskol, released last year. This quickly explodes into a blood-curdling wall of sound, which in a live venue feels highly spiritualistic and ceremonial. The chants combined with the agonising screams, the intense periods of fast distortion combined with the peaceful and delicate intervals, creates an unsettling and undeniably enthralling experience.

At one point, the pit turns to a prayer room, with the keenest of metalheads on their knees, flailing their arms at their hooded master. You don’t feel like you’ve been to a gig after seeing Batushka. You feel as though you have just joined the most exciting, most evil cult to grace the land. Performing many songs from their two most recent EPs (this evening sold as a combined CD album, available to buy on this tour only), tonight Batushka marks their territory and cements their position in the black metal world. In recent years, the Polish tyrants have battled doubt and controversy. Who is Batushka? Well, they certainly showed us that this evening.