Despite Venom spawning the whole movement, for far too long British black metal (like British thrash in the ’80s) has been seen as a poor relation to its European counterparts. No more because Barshasketh, over the past decade, have left a trail of fine releases, constantly refining their music until we arrive at their self-titled fourth album. It’s perhaps the purest distillation of their sound and finally these shores have a band who can stand shoulder to shoulder with the genres luminaries.

Originally formed as a one man project by the multi instrumentalist Krigeist things really took off when he relocated to Scotland from his native New Zealand and assembled a full band. On a mission to produce pure black metal free from any genre cross pollination Barshasketh takes its cues primarily from the second wave of black metal both aesthetically and musically. They recall a time before slick videos and big production budgets when the scene was inhabited by individuals and mavericks and the focus was solely on the music. That’s not to say Barshasketh are generic, far from it. At once traditional and forward facing they filter their love of the second wave through a modern production so it’s reimagined and reinterpreted. However Barshasketh, totally impervious to external influence, does exist within a vacuum and in that respect the band have achieved their aim.

Opening like a huge door to reveal Dante’s Inferno, ‘Vacillation’ begins proceedings with thunderous drums and intricate guitar lines which set the tone for the next 55 minutes. Like a ruler of the underworld vocalist Krigeist spews forth venomous lyrics with such fury that his integrity cannot be questioned. Epic and unrelenting the band create a huge sound which fills every available space and this is primarily due to the production. Ably recorded by Tore Stjerna at Necromorbus Studio, he’s given the band a multi-layered sound that’s married arctic coldness with a real depth and it’s the kind of album that’ll reveal hidden nuances on repeated spins. Another boon is making MK’s drumming prominent in the mix, his busy style is unrivalled and often guides the band by dictating tempo through blast beats which nestle next to quieter passages.

Something of a concept album based on Be’er Shachat (which translates as ‘pit of corruption’; it also gave the band their name) Barshasketh does hang together well thematically. Exploring the cyclical phases of the self the band guide the listener through destruction, purification and rebirth through black metal atmospherics: ‘Consciousness I’ evokes images of fjords, crystal lakes and snow topped peaks and is a fine slab of melodic black metal. It’s counterpoint ‘Consciousness II’ beings with a haunting intro, the band cleverly employing light and shade, meaning when the blast beats hit it’s with the force of a thunderclap. ‘Ruin I’, at just under five minutes is the albums shortest track and sounds like a microphone dipped into the pits of hell. Likewise on ‘Ruin II’ a cold, frostbitten ambient midsection serves as a foil to make the heavy passages, which bookend the song, even heavier.

Punctuated by the screams of a tortured soul ‘Rebirth’ is a six and half minute pummelling. Contrasting guttural growls with the not so guttural it’s not for the faint hearted as it thrashes along at full tilt, barely pausing for breath. ‘Recrudescence’ closes the album in epic fashion with the band firing on all cylinders before seguing effortlessly into an ambient outro.

Artists usually self-title their debut album or at a moment of rebirth however Barshasketh, the bands fourth release, finds them at the peak of their powers. It’s a nice problem to have but you wonder how the band will top this effort. A bold statement for early January but Barshasketh will surely rank as one of 2019’s top releases. 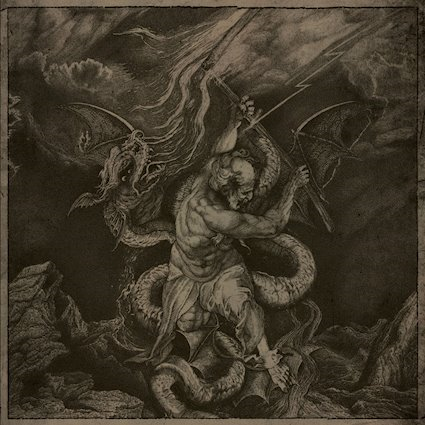