Ivar Bjørnson has an innovative new musical project in the form of BardSpec. Paul Castles lends an ear to the Enslaved singer’s latest venture, released via By Norse Mvsic on 23 June 2017

Ivar Bjørnson is clearly a man with too much time on his hands. Not content with forging a 25-year career with Norwegian metal giants Enslaved, Ivar led the By Norse culture project, formed an alliance with Wardruna frontman Einar Selvik called Skuggsjå to mark the bicentenary of the Norwegian constitution and now has a new album out with his emerging electro experiment, BardSpec.

By Norse was much more than a conventional gig. It incorporated different strands of artistic endeavour all with a view to capturing something of the original Norse spirit. Not surprisingly the whole concept was lapped up by Ivar’s many fans and a great time was had by all. During the hugely successful London By Norse, Ivar managed to shoehorn in a performance with Enslaved, Skuggsjå and BardSpec.

The latter were launched at Roadburn in 2015, and with the release of Hydrogen have now become a properly functioning unit with Ivar joined by Steve Austin on guitars/effects and David Hall presenting the live visuals.

This unique amalgamation of minds reveals an altogether more amiable side to Ivar with a series of instrumental compositions all coming in it at around 10 minutes long. The first, following the brief intro, is ‘Bone’ in which an engaging melody is latched onto and then repeated pretty much non-stop for the duration of the record, with just the occasional nuanced moment to enhance definition at carefully selected times. ‘Bone’ has none of Enslaved’s Nordic swagger, although in its own way this softly chiming piece is still engaging, albeit in a much warmer way. 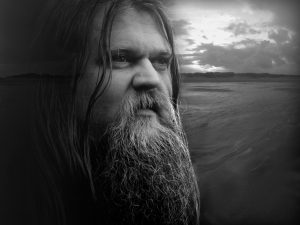 ‘Fire Tongue’ is a shift in a slightly darker direction, again the constant beat circles but here there are more forks in the road and the meditative grooves attempt to explore them all. The effect is to draw you into something approaching a transcendental state as the electro ambient contours swirl around the room.

Anyone old enough to recall the Cocteau Twins may recognize some of the ethereal layers imperiously developed on ‘Gamma’. While the grooves are gossamer thin there is a deeper sense of resolve at the heart of this majestic composition that shimmers with an almost hallucinogenic sheen. As it reaches the end of its journey the trajectory begins to climb upwards and a brief human voice filters between its persuasive kaleidoscopic patterns.

‘Salt’ is much more reflective in tone and texture, its path rarely deviating from the steady synth pulse that ticks over with metronomic consistency.

While taking something from fellow Norwegian acts such as Biosphere and Wren, the more industrial sections of Hydrogen also contain elements of Godflesh. Teeth is an almost dreamlike finale, meandering through a softly lit path of lush long sonic grooves which are joined by an electro pulse at the midway point.

Enslaved’s legion of fans will ensure plenty of interest in BardSpec and while some distance removed from Ivar’s day job, Hydrogen nevertheless is an intriguing album and one certainly worth spending some time with.