Despite the band not being pleased with the ‘Poor Man’s Moody Blues’ tag aimed at them by journalists back in the day there is no doubt that when the gods of music were sorting out the genre system Barclay James Harvest were placed firmly in the same pigeonhole as their esteemed colleagues. A point they even addressed themselves in their response to those very journos the John Lees composition of the same name from 1977’s Gone To Earth album. But this was never the whole story when it comes to BJH. Over the years there have been a number of personnel issues, whether it be the early (and ongoing) friction with Robert John Godfrey over the writing credits to their popular ‘Mocking Bird’ track from second album Once Again or the John Lees versus Les Holroyd issues over ownership of the Barclay James Harvest name and legacy. However, back in 1975 the band found themselves with their first studio album to chart in the UK at #32 (following the previous year’s Barclay James Harvest Live album hitting #40). The line-up of John Lees (vocals, guitars), Les Holroyd (bass, guitar, vocals), Stuart “Woody” Wolstenholme (keyboards, vocals) and Mel Pritchard (drums, percussion) entered producer Elliot Mazers studio in San Francisco to record what would become one of their all-time classics.

With the Moody’s being on hiatus since 1974 and having not released an album since Seventh Sojourn in 1972, where they took a slightly more rocky approach, this meant that the time was ripe for BJH to step up. No matter how uncomfortable it may be Time Honoured Ghosts does show exactly why such Moody Blues comparisons had plagued them. With its understated soft rock sound and exquisite vocal harmonies there were always going to be comparisons made. Musically the compositions show the vast strides that each of the songwriters had made. Lees is first up to showcase his maturing writing skills with ‘In My Life’ looking back at times past and the poignant words stating, “Mister middle of the road, Reaps what you sow”. Holroyd follows this up with a rare dip into spiritual matters on the mainly acoustic ‘Sweet Jesus’ showing hints of CSN&Y. The pair trade shots throughout the album only interrupted once by the Wolstenholme tune ‘Beyond The Grave’ giving shades of ELP in its big organ and orchestral arrangement. Lees contributes ‘Hymn for the Children’ the natural successor to Everyone Is Everybody Else’s ‘Child Of The Universe’ centring on themes of equality still so relevant today, the vocal harmonies of ‘One Night’ telling the flip side of the red light punter in its squeeze box lilt and the Beatles mash up ‘Titles’ has that sprinkle of Lennon/McCartney magic borrowed to great effect. These go up against the Richard Bach (Jonathan Livingston Seagull) inspired ‘Jonathan’, ‘Song for You’ which finds the band rocking out at their most progressive and ‘Moongirl’ once again showing the fab four influences in its evocative harpsichord tones, these put up a valiant fight for the Holroyd camp as the tracks unfold. As with the 2003 remastered release the main tracks are joined by a 1975 remake of the 1974 single destined for US release (which never happened) of ‘Child of the Universe’ which originally featured on previous album.

The accompanying DVD contains the excellent 5.1 up-mix of the album taken from the original stereo master tapes along with promotional films for ‘Jonathan’, ‘Titles’, ‘Moongirl’, ‘One Night’ and ‘Beyond the Grave’. These films were commissioned by Polydor to accompany the album’s release and feature the band playing (in a tent) at the Pinewood Studios with added inserts to enhance the mood. ‘Johnathan’ is accompanied by ethereal clouds and summer skies, ‘Titles’ features backstage Beatles clips, and ‘Moongirl’ a naked girl swimming/floating in a pool… you get the drift. All very much of the time and a little bit low budget The Song Remains The Same.

Still one of their strongest studio releases with Time Honoured Ghosts The Moody Blues almost became the poor man’s Barclay James Harvest but BJH could never quite find their ‘Go Now’, ‘Question’ or ‘Nights In White Satin’ to take them to the next level.

Time Honoured Ghosts Remastered
1. In My Life
2. Sweet Jesus
3. Titles
4. Jonathan
5. Beyond the Grave
6. Song for You
7. Hymn for the Children
8. Moongirl
9. One Night

10. Child of the Universe (1975 remake for unreleased US single) 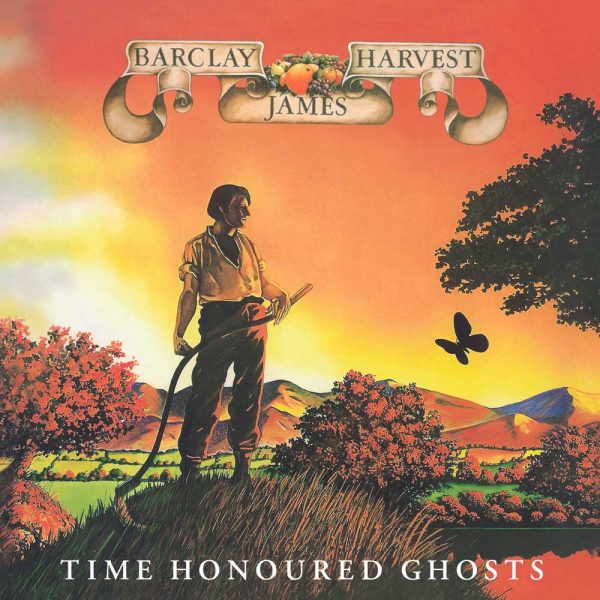