Multi-platinum hard-rock band Bad Wolves have announced an extensive list of tour dates starting in Europe in October and finishing up with a series of headline shows in the UK in December 2022. These shows end a huge 2022 touring run which will saw the band hitting the stage in North America with Papa Roach, Falling In Reverse, and Hollywood Undead in March and April and then again through July and August.  This October they embark on a full European run Volbeat and Skindred. 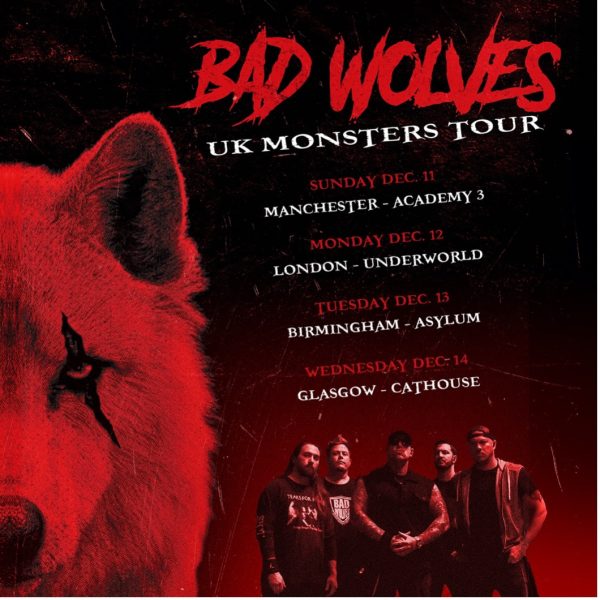 The European tour will be the first time Bad Wolves have been able to bring their 2021 studio album “Dear Monsters” outside of North America. Despite this, the critically acclaimed album, the first featuring new vocalist DL, has accumulated over 40 million streams worldwide and counting…

The band have not rested in 2022 – releasing single “If Tomorrow Never Comes” (featuring Spencer Charnas of Ice Nine Kills) in March 2022. In July 2022 the band released the “Sacred Kiss” EP via Better Noise Music featuring a new version of “Sacred Kiss” featuring Aaron Pauley from Of Mice & Men. Also included on the EP are unreleased tracks “The Body”, “Up In Smoke” and an acoustic version of “Sacred Kiss”. The official music video for the title track is arguably the band’s best video yet featuring intense performance footage intercut with a dark storyline featuring imagery that, although filmed in advance of the release of Stranger Things S4, is strikingly similar to imagery seen in the “upside down” world of this global hit Netflix series.