So, let’s do this right. Quick, to the point, no frills, taking care of business in a flash. Album numero three from Norfolk’s Bad Touch is a career high. Recorded pretty much live in the studio for Marshall Records (yes, they of the amps…walls of amps), it’s a big, dumb classic heavy rock album, chock full of riffs, more riffs, shrieks and oodles of geetaws. This could break them big.

Albums like this can be tricky to review…they’re just really good! Songs maybe don’t show a huge amount of variety of display groundbreaking experimentation but what they deliver they deliver with class and style. We have here a cracking collection of rock songs, referencing the past without aping it, moving forward and giving a masterclass in great songwriting and kickass performances.

The usual reference points are all here – Zep, The Stones, Thunder, classic blues and a dash of outlaw country. We kick of in fine style with huge riffs, epic chantalong choruses, meaty guitars and thunderous drums. ‘Dressed To Kill’ has killer ‘Black Dog’ stop-starts while lead single ‘Skyman’ (an ode to Duane Allman) has lashings of energised guitar interplay, so, yeah, Southern Rock is in there too, but then why wouldn’t it be?

‘I Belong’ is almost a country ballad until the bruising powerchords and big guitar finish while ‘Show Me What It Means’ has a big 80’s style riff. ‘Take Me Away’ is perhaps the albums heaviest moment, a big clattering riff drops out into a murderous bass rumble. Even when the songs occasionally slow down those guitars never let up.

The songs just keep getting better, ‘Slow Tempest’ heralds the first appearance of unplugged guitars, it hits a bit of a Bo Diddley groove until the electric guitars reappear, the solo is epic and the guitars somehow manage to become even bigger still, it’s the closest we come to a power ballad. The albums ends on a classy, low key note, a nice antidote to the bombast which has gone before – ‘Bury Me’, recorded in one take, is just voice and guitar, everything is brought back to where it all begins.

So, yeah, Robert’s your mothers brother. A rarity in these days, just a good, uncomplicated rock album, the kind that’s almost died out a few times over the years but, as long as we have bands as good as Bad Touch, never will. ‘Tis great, go get it. Job done. 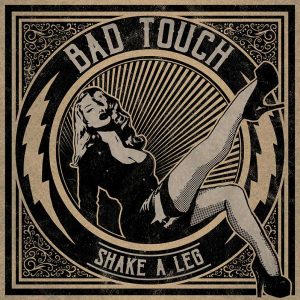