Available from 24 February and reviewed by Ian Savage

For the punk rock comeback of the last decade, you’ve got to go a long way to beat Sweden’s Backyard Babies. After a five-year layoff yielding a few worthwhile side projects and much nail-biting among fans as to whether the quartet would ever pull it together again, they returned in 2015 with the tour de force ‘Four By Four’ and an accompanying forceful tour.

Its culmination in their adopted hometown was filmed in Stockholm last February, and now finds DVD release as ‘Live At Cirkus’ – this reviewer was massively positive about the tour’s Wolverhampton show, so how does the DVD rendition stack up?

For starters, it’s very easy to see why MR’s photographer had a tough time of it in Wolverhampton. The simple-but-effective trick of outlining the backline in LED strings and mostly backlighting the band proved pretty perfect ‘on the night’, but it makes the experience fairly hard to watch on a screen. Wide shots from behind the crowd allow little but the aforementioned backline to be seen, and even the hand-held onstage camerawork struggles to pick out the Babies with any clarity.

That said, the sound mix is spot-on and the setlist (pretty much identical to the Wolves show) is superb, big-hitters blending effortlessly into fan favourites. If you don’t speak Swedish you might have a hard time comprehending the inter-song banter, but the momentum of the show is totally evident, with the three ‘front-men’ making full use of stage space and ego risers; Dregen in particular slings his Gibson 335 around in an unconscious Chuck Berry homage like he knew what this year had in store.

You probably won’t actively watch ‘Live At Cirkus’ more than a handful of times unless you’re a true die-hard – but as a pure live album it’s the best they’ve put out since 1998’s hotchpotch ‘Safety Pin & Leopard Skin’ in terms of translating the Babies’ sheer ramshackle onstage energy. Almost certainly at its best as post-pub ‘background’, when you’ve convinced a non-fan or two to give them a go – or if you caught the tour, as a reminder of how good it is to have Europe’s premier sleaze-merchants back on the road. 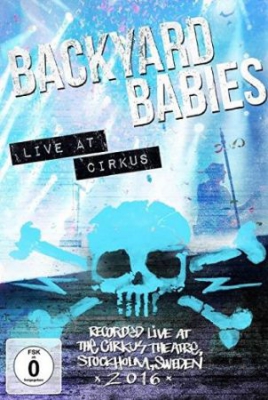