One of the most amazing, mind blowing, shit-eating-grin-creating albums ever!

If you’ve just watched the above video for the first time I expect you reacted like me. Your jaw hit the floor. You muttered something along the lines of “What. The. Fuck”. You went to pause but you couldn’t – you had to watch. You’ll find yourself humming it later, you’ll watch it again. They’ve got you! This thing has 27 million views to date – trust me, this is big!

For those who don’t know, Babymetal were formed in 2010 and feature a ghost metal band fronted by 3 cute Japanese schoolgirls and the resulting mashup of J-Pop, choreography and ludicrously heavy power metal has been dubbed ‘Kawaii (cuteness) Metal’. Yes, this is manufactured, but listening to it you get the feeling that, like some kind of experimental Japanese Idol Godzilla, this beast has mutated out of the control of its creators and is rampaging across the globe.

So, the debut album is finally upon us – can it survive on its own without the ‘Battle Royale’-gone-goth visuals? Fuck yes is the rather to-the-point answer. This is one of the most amazing, mind blowing, shit-eating-grin-creating albums I have ever heard. The girls – lead singer Su-Metal and backing singers Moametal and Yuimetal (all aged between 15-17) are fantastic – despite having not a Scooby Doo about metal when the band was put together. Their innocence and joyfulness is a completely original counterpoint to the blunt force trauma being created behind them. Beauty and the beast indeed! Danger and fragility. The combination of growling and squeaking is both disturbing and reassuring. It’s as though they are being chased by some corrupt, sinister creature. It’s Pikachu fronting Slipknot.

And the music? Phenomenal! This band can hold their own with anyone out there. And the songs have extreme multiple personality disorder. ‘Megitsune’ goes from Japanese folk to Europop into a genuinely pounding industrial midsection. ‘Gimme Chocolate’ should be irritating but it isn’t. It simply is what it is – happy, addictive, perfect pop metal – with twin guitar shredding.

And it doesn’t stop there, ‘Line’ is the bastard offspring of dubstep, squeaky rap and devastating mathrock… but it’s a good bastard, a Jon Snow… honourable and righteous!  These songs don’t sit still, there’s power metal, weird electronica, computer game sounds, thrash, death, grindcore, ambient choirs and pummelling techno that makes The Prodigy sound like they’re playing an old mandolin and a couple of stylophones – how on Earth do they make this work?

And ‘Song 4’ (which, oddly, is track 8) is flat out insane – thrash, football terrace riffs (you’ll understand when you hear it), powerchords, death metal growls from the very bowels of Hades itself and then… reggae lite! I shit you not. It gives you no chance to catch your breath and it’s not a smokescreen to cover up any flaws or lack of talent, it’s just breath takingly stunning. The most gloriously wild musical ride I’ve been taken on in years.

What’s needed here, fellow rock dudes, is an open mind. When Dylan plugged in, when Hendrix and Townshend experimented with feedback, when Iommi downtuned his guitar and the blues became something new and heavier, something that had never been heard before. Our scruffy forefathers had to make a leap of faith and go with it and now it’s our turn. This is ground zero, we are present at the birth of something completely new and original and it is as valid and mind-bending as any genre which has gone before. As Japan and its culture grow in terms of population and influence this may well be a glimpse of things to come. If ‘Blade Runner’ was a vision of our future, Babymetal will be the soundtrack. 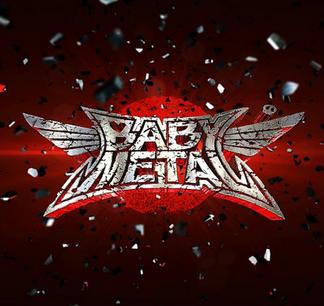