His eighth solo album, Aynsley Lister ticks that box we term blues rock guitarist. He’s 25 years into a career that pitches him as such. He’s not had an album out since 2016’s Eyes Wide Open and dipping into a review that I did for that way back when, I was basically stating that his voice had a come-hither look, with a “just-got-out-of-bed croaky sigh” that women ought to find appealing, and men jealous. I noted, vocal comparisons could be made to Michael Bublé and Jamie Cullum, if even superficially substituting blues inflections for their soft jazz intonations. Time has been kind to the voice, he’s still got it, and men can remain suitably envious.

Not having experienced Lister live, I can only go by what I hear on record, and as a guitarist, he mainly keeps it featured within a son’s structure, no blasting off just for the sake of it. That the songs step outside the blues and ought to be equally appealing to the mainstream I see as a plus. If you like your blues raw, then this isn’t for you, look elsewhere plenty more of that on offer.

Along For The Ride offers thirteen songs, unlucky for some, but you won’t find yourself counting here, just listening a while. The offer something of a young middle-aged flavour in subject matter. We apparently have a man fairly assured of his place in the world, content to express his likes and dislikes in equal measured, from pop culture to social media, love and life.

A slow brooding guitar stirs over moody organ, a drum beat picks up a dusty trail for a slow ride outta town, as a world weary but melodic voice starts imparting his distrust, of what the internet has to offer in opening track ‘Amazing’. That it evokes something of a lonesome cowboy feel musically seems apt with the wild west once being seen as the last frontier. Brighter and bigger the sun comes over the horizon as electric guitars sheer up in force, Lister’s voice soaring higher come more declamatory choruses, two brief solos and some fine whooping near the end.

‘Bide My Time’ comes next, and thematically a natural follow-up, being about not finding enough time to be with the ones you care for. Guitar plays blissfully against piano on this one, as he runs down the mundane checklist of things that preoccupy his day, wishing for a simpler time, when being young and in love was all that mattered. It’s dipped in a glossy Americana as viewed from the bedsit window of a Richard Curtis movie. With eyes wide open on modern-day dilemmas ‘Wait For Me’ continues those themes but with a wellbeing sidebar, over a taught upbeat funky skip of a blues beat, grooving to a close-up dance come the chorus. Pretty is an undervalued word these days, but it counts here. There are two brief but cool guitar solos in this one, the first like George Benson checking out the blues, the second like Ernie Isley. Good role models.

The songs really do develop one from the other on Along For The Ride, with ‘Is This Really Happening Now’ expanding that wellbeing factor to encompass the ravages of covid and Russian invasions alike I’m sure, in the context of all that’s ensued over the last few years. Musically it proves a more upfront strut of a blues rocker, and despite its implied lyrics, overall upbeat in approach, its solo craning out in high pitched sustained notes over staccato chords initially, a more spiralling introspective one in the closing moments.

‘Eve Part 1’ proves not to be a love song, per se, but more a précis on the Killing Eve TV series. Slow with an air of suspense and intrigue, I’d say stylistically it’s more in keeping with classic Bond movies, via its imaginative use of mood, ably brought to the fore its closing solo, that veers between knowing squeals, subtle divebombing, vengeful thrust.

Hymn like ‘Cast A Light’ is a bluesy ballad of hope that calls to mind the kind of material B.B.King produced in conjunction with The Crusaders. It’s partnered by the album’s title track, ‘Along For The Ride’, that endeavours to appreciate the good things in life where you find them, feel good and more in-the-moment than the previous tune, a bluesy expressive workout on guitar, amid tender backing vocals near the end is but one aspect of a finely arranged tune. Lest one become too comfy ‘World Is Falling’ returns us to all that we see when we switch on the news, and though the mad, mad world out there might be yet to reach our door it’s infringing on what we took for granted as the norm.

Definitely, ‘Invincible’ comes on harder, pounding out in rhythm and melody, again rejoicing in the good things we have going for us, namely friendship and hopefully a little love too. With a little tickle or two of funk in a distanced background riff under proud upfront chords, some wide-sighing harmony vocals and blasts of more forceful lead guitar, with rock, blues and soul stirred together. Next-up, ‘Made Up My Mind’ follows in a similar vein, while standing at the edge of the stage with a more forceful approach, drums propelling this number through its changes as probably the loudest and most out-there blues rock tune on the album.

‘Masquerade’ takes a side turn, as sultry New Orleans shuffle by way of a tabloid-littered Fleet Street, the slow No One Else But You’ is akin to early Fleetwood Mac in sultry mood sitting in with Ray Charles – It’s all late night, smoky bar, a glass of single malt and an aching for that woman that ain’t there no more, guitars set to the three Kings’s school of the blues.

The late Rory Gallagher used to have a thing for penning songs about private eyes and secret agents, Aynsley Lister’s obviously infatuated by the twisted obsessiveness between the lead characters in his favourite thriller ‘Eve Part II – Love You To Death’ concludes this album. More cinematic, and as if he’d pulled in favours from Suede and maybe Radiohead, this is high-time contemporary rock number with a blues filtered-edge that may stretch the guitarist’s fans comfort but in a good way.

Accessible, contemporary, smooth talking but rarely smug, this is an album well-timed for these wintry months, storing bad news and placing it safely to one side, while counting the blessings of what’s here and now. It’s also a record recommended for quiet Sunday mornings, and late nights with wine and whisky in the company of a lover. 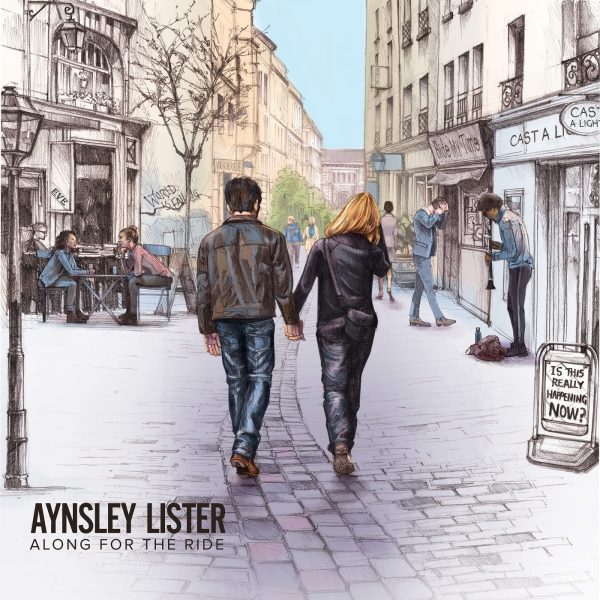