If ever an album represented an artist’s best work, then this is it…

Repackaging back catalogues is still a major source of revenue for Record labels. Some, like Cleopatra Records, have the knack of spinning those packages into something new and shiny. This Axe compilation is a prime example. It comprises half a dozen or so key tracks from each of the band’s 6 albums, released 1979 – 2001, plus 2 bonus tracks, all on 2 CDs. If ever an album represented an artist’s best work, then this is it.

If there was Chart for rock bands who could’ve and should’ve, Axe would be up there, jostling for a place in the Top Ten. Afflicted by the usual mix – stop me if you’ve heard this one – of bad management, label problems and lack of exposure. And the hand of God. Led by guitarist/ songwriter, Bobby Barth, the band’s initial output epitomised the burgeoning sound of pomp/AOR/Arena Rock. REO Speedwagon, Foreigner and Styx were all making sizeable dents in the Billboard album charts. The music of Axe didn’t.

The band’s first two albums (Axe, 1979 and Living On The Edge, 1980) made few waves. It is the sound of a band who clearly have something to offer but can’t quite translate it into the finished article. A good producer would have beefed up the wafer thin production and lifted the guitars to the surface, where the harmonies are. As it is, a low density mix undermines some high calibre songwriting. From the debut, ‘Hang On’ neatly matches pomp rock to tuned-in pop sensibilities, and the meatier, bluesier ‘Sympathize’ lazily rises and falls on the redemptive swell of a mournful Hammond Organ.

The second album inched the band forward. ‘Living On The Edge’ and ‘Fantasy Of Love’ rivalled Mick Jones’s proggier writings on Foreigner’s debut album, but where the Anglo American band were daring and different, Axe were derivative, and too often lacked depth and direction.

Then came the breakthrough… kind of. The band’s third album, the more polished and expensive sounding Offering (1981) launched first single, ‘Rock’n’Roll Party In The Streets’ into heavy rotation on FM Radio. Its simple anthemic quality caught the imagination of the public, while other, more sophisticated fare didn’t. The gloriously uplifting ‘Jennifer’ and the classic, premier league ‘Silent Soldiers’, later covered by Barth proteges, CITA, failed to register. The band’s fifteen minutes had come and gone.

Despite the entertaining variations wrapped up in fourth album, Nemesis’s (1983) wholly misleading heavy metal artwork, this album strangely ended up being damned by its own unpredictability. Yet, as we move from track to track, it’s those apparently random changes in style that make this release stand out. The spirited biker rock of ‘Heat In The Street’ largely succeeds in recapturing ‘Rock’n’Roll Party’s blue collar swagger. Then switch to ‘Young Hearts’ AOR thrust. Emblematic of an era, it is a song that clearly benefits from a rigorous, streamlined production. And ‘Eagle Flies Alone’, a perfect balance of melodic rock urgency and passionate lyrical advocacy. This is high calibre songwriting, the track could easily have appeared on any Journey album of the time. An underrated release, swamped at the time by the output from big label bands and big budget labels.

Guitarist Michael Osborne was killed in a car crash in 1984. Bobby Barth was badly injured in the same accident and took time to recover. Not surprisingly, the band dissolved, only to reform more than 10 years later, with ex-Frank Zappa frontman Bob Harris on vocals. Clearly Barth’s songwriting skills were unaffected, and indeed arguably had matured. V was released in 1997. Between times, Barth had been working with European rock band CITA/Guild Of Ages and clearly appreciated the need to reflect the harder, grittier sound ushered in by the new decade. How do you do that without losing the melodic rock integrity of your earlier work? Opening tracks, ‘Magic In Our Eyes’ and ‘Heroes And Legends’ provide the answer. Stinging, biting axework, sinuous melodies, vertiginous choruses and thumping percussion. Barth’s production now sounded dynamic and although his “man against the world” lyrics may seem dated now, in Harris he had found a compelling, convincing vocalist.

The band’s last full studio album Crown (2001) disappears into the rear view mirror, happy to head back down the road to the eighties, in many ways a tribute to all the bands who’ve fallen by the wayside, who couldn’t keep up, or who found themselves stranded outside their comfort zone, and threw in the towel. It’s melodic hard rock, powerful, joyful and stylish. The sound of a band who have survived, who are comfortable and confident in their skin, shifting through the gears, hitting cruising speed with ‘Good Times’, a rock song with a grown up resonance, and ‘Foolish Deception’, where an undistinguished verse accelerates into a fabulous chorus, reminiscent of Oz AOR legends, The Southern Sons.

Bonus tracks, the previously unreleased ‘Bad Sometimes’ and ‘No Heroes’, are chalk and cheese. The first is a Neanderthal chest beater. On the second, Barth revisits familiar lyrical themes of personal responsibility and the inevitability of heartbreak. It’s a neat mixture of toughness and tenderness, and is a genuine bonus. Anthologised and immortalised, Axe might well be remembered not for what they achieved but for the fact they nearly made it, but didn’t. As this collection shows, only the breaks eluded them. 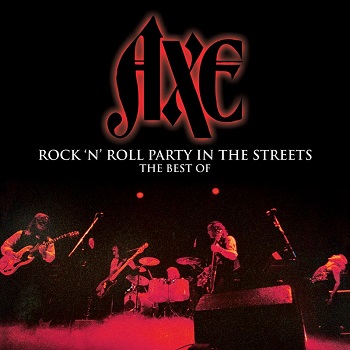