Sometimes you just can’t go back…

It’s always a bad sign when a reformed outfit include the original band’s biggest hit on their “debut” album. It immediately plants the seed of doubt in your mind about the calibre of the new material. With Get Off Your Ass, that seed grows and blossoms into full blown disappointment as the new songs reveal themselves.

AOR / Melodic Rock, whatever you want to call it, was never cerebral. The best stuff, the stuff that mattered, was emotionally urgent and immediate. Yes, sentimentality usually stood in for real sentiments, but it formed the foundation that underpinned success. And if you want to make a comeback you have to reconnect with that.

On GOYA, only two songs measure up. ‘All I Own’ is a passable imitation of eighties’ chest beating balladry. It does tend to plod a bit, but is enlivened and illuminated (as are most tracks here) by Steve Lynch’s expressive axework. Daniels’ voice has a bluesy timbre that breathes life into a maudlin lyric. It leads straight into ‘You Are Us We Are You’. That might sound like the title of an new Adam Wingard horror movie, but in fact is the album’s standout track, by some distance. Its lyrics are a little stilted, but Lynch’s tight, toughened up axework provides all the the impetus the song needs to reach a climactic, anthemic chorus, one that truly captures Autograph’s rock’n’roll spirit.

Elsewhere, there are too many tired lyrics and forgettable melodies to give the new material any traction. A band trying to forge its own signature.

The album closes, fittingly or not, with a live rendition of the anthem lover’s anthem, ‘Turn Up The Radio’. Sigh. 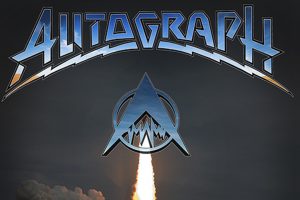