You mightn’t think the Arizona desert was particularly fertile, but in terms of thrash metal it positively bloomed. From the same scene that birthed Flotsam and Jetsam and Sacred Reich came Atrophy and although they never made the same commercial inroads as their peers, they illuminated the golden age of thrash with two stunning albums; 1988’s Socialized Hate and Violent By Nature (1990). This set collects those two records and demands they get some long overdue respect.

A heart beating in the depths of a nuclear reactor makes for a rather ominous introduction, and it’s one that makes the musical explosion that is opener ‘Chemical Dependency’ all the more bombastic. Like classic Maiden (only on cheap amphetamine) the band race out the blocks and proceed to dizzy the listener in a maze of complex riffs. In 1988 this was about as technical as metal got and it placed Atrophy at the vanguard of a new movement (which explains why they were oft overlooked, as bands who followed refined the sound for mass consumption). Socialized Hate rarely lets up over 38 fast and furious minutes, and it’s a white-knuckle ride which finds guitarists Chris Lykins and Rick Skowron trading blows while drummer Tim Kelly seems intent on pounding his kit to dust.

Featuring a psychotic clown grabbing nuclear warheads, the sleeve that houses Socialized Hate still seems particularly pertinent and its indicative of the sound contained within. The soundtrack to a world perishing under a mushroom cloud this album casts a dark shadow and its one enhanced by an astute lyricism. Eschewing the stereotypical thrash themes in favour of a realism finds Atrophy covering topics such as drug abuse, racism and organised religion and this focus on reality adds another layer of heaviness. Only the trivial ‘Beer Bong’ lets the side down, but as it comes gifted wrapped in an all-out thrasher, we can forgive a moment of youthful folly. Epileptically flitting from speaker to speaker, ‘Urban Decay’ makes for a raucous closer but, amazingly, better was to come from this quintet.

When Atrophy dropped their sophomore album Violent By Nature in 1990, some critics cried a lack of development and while it’s true there’s no radical departure from the band’s sound (but, hey, if it’s not broke, don’t fix it) a musical growth is evident. Taking all that was good about its predecessor and ramping it up a notch makes Violent By Nature a superior album. A bold production places James Gulotta’s bass prominent in the mix, the whole band sound tighter and subsequently tracks such as opening shot ‘Puppies And Friends’ are the musical equivalent of canon fire. Belying its trifling title ‘Puppies And Friends’ is a thrasher of the highest order that continues the band’s tackling of difficult subjects (vivisection) and with no ‘Beer Bong’ in sight Violent By Nature is a more mature, measured album.

As with many thrash bands who came of age in the 1980’s the hardcore punk scene was a big influence on Atrophy’s sound. Harnessing the energy (and lyrical adroitness) of acts such as Bad Brains and Circle Jerks and fusing it to metal musicianship makes for an cataclysmic combination and Violent By Nature veritably bursts at the seams with unbridled aggression. However, slower tracks such as ‘Process Of Elimination’ and those unorthodox time signatures contained on ‘Slipped Through The Cracks’ ensures that this album ebbs and flows perfectly and never descends into one long thrash-athon. It was on this album that vocalist Brian Zimmerman came into his own and his phrasing is vital to the record’s flux, especially on closer ‘Things Change’ which, considering this was to be the bands last output for several decades, made for a fitting finale.

When guitarist and main songwriter Chris Lykins quit the band for a medical career Atrophy’s upward trajectory came to a shuddering halt. The quality of material they left behind ensured they were not forgotten, and a new incarnation of the band is currently writing a third album. But if you want to (re)discover two classic thrash albums, this collection is for you. 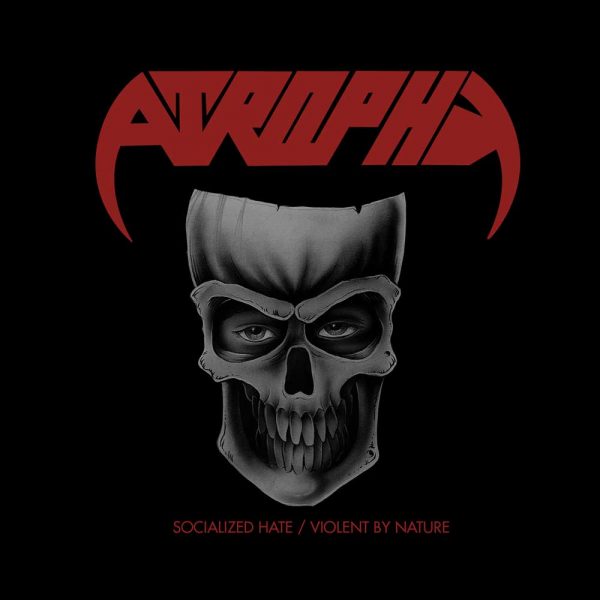