Swedish melodic death metal pioneers At The Gates have just released their third single and video for “The Fall Into Time” off their upcoming album The Nightmare Of Being out July 2nd via Century Media Records. The music video was directed by longtime At The Gates co-operator Costin Chioreanu / Twilight13Media.

At The Gates vocalist Tomas Lindberg Redant states, “Hello everybody! As you might have already guessed, this album is our most ambitious effort yet, including a lot of different orchestrations and new takes on arrangements, etc.

This track, ‘The Fall into Time’ is one of the centerpieces of the album. It is big, demanding and epic. We have always found it intriguing to compose songs like these, think ‘Neverwhere’, ‘Primal Breath’, ‘The Night Eternal’ and ‘Daggers of Black Haze’. It is heavy, mean and dark, as well as almost cinematic in its thematic approach. I have always said that the At The Gates listener wants to be challenged and that you hopefully all are as curious as we are when it comes to exploring new musical territory. This song is one of those moments… Enjoy!”

“For the video for this more adventurous track we chose to work again with our dear friend and co-conspirator Costin Chioreanu, as we thought that it required a more arty and avantgarde approach. I was, as always, very intrigued to see what he would come up with, as he has a deep understanding of what At The Gates is about. He did not disappoint, and this video is a perfect complement to a song like this. Costin went all the way with this one. Truly inspiring!”

Check out At The Gates’ previously released music videos for “The Paradox” and “Spectre of Extinction” off The Nightmare Of Being.

At The Gates are also launching an exclusive U.S. only guitar giveaway for fans who pre-save/add the band’s forthcoming album The Nightmare of Being on Spotify or Apple Music. Enter the contest HERE for a chance to win an At The Gates signature model Solar Guitar and 2 band t-shirts. 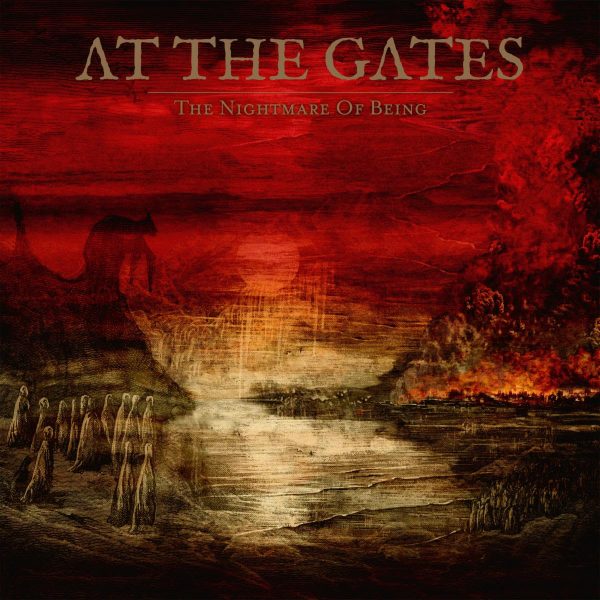 While main parts for The Nightmare Of Being were recorded in several different Swedish studios (drums at Studio Gröndal with Jens Bogren, guitars and bass with Andy La Rocque at Sonic Train Studio and vocals at Welfare Sounds with Per Stålberg), the album was mixed and mastered at Fascination Street Studios (Amon Amarth, Opeth, Kreator, etc.) by Jens Bogren, who previously worked with AT THE GATES on their 2014 comeback album At War With Reality. The album’s visual concept and album cover was developed by artist Eva Nahon.
The Nightmare Of Being Tracklisting:
1. Spectre of Extinction
2. The Paradox
3. The Nightmare of Being
4. Garden of Cyrus
5. Touched by the White Hands of Death
6. The Fall into Time
7. Cult of Salvation
8. The Abstract Enthroned
9. Cosmic Pessimism
10. Eternal Winter of Reason
The Nightmare Of Being is available in the following formats:
·       Ltd. Deluxe Transparent Blood Red 2LP+3CD Artbook
·       Ltd. 2CD Mediabook
·       Standard CD Jewelcase
·       Standard LP
·       Digital Album
The album’s limited deluxe 2LP+3CD Artbook (depicted below) contains exclusive transparent blood red vinyl on 180g. and will include a 9-track live LP and CD as well as an exclusive instrumental version of the entire The Nightmare Of Being album as a bonus CD. Furthermore, it comes with an extended 32-page booklet, a double-sided A2 poster and 4 art prints. The album’s limited 2CD mediabook comes with an extended 32-page booklet and a 9-track live CD as bonus.