Something of a musical doppelgänger, Asomvel certainly wear their Motörhead fandom on their sleeves. It’s said every person has a double and if that’s true then Asomvel are the musical equivalent. However, to label Asomvel mere copyists would serve them an injustice. Sure, while listening you’ll have to remind yourself it’s not Motörhead but, really, what metal band (or punk group even) doesn’t owe something to Lemmy and his cohorts? Asomvel are a little more honest in their influences and in their third album World Shaker have produced a great metal album that stands independent of any obvious comparisons.

Opening with title track ‘World Shaker’, this album is straight out of the blocks and wastes little time on niceties. An addictive riff, a rumbling bass that’ll loosen fillings and drums that ricochet round your headphones like stray shells ensures World Shaker gets off to the best possible start and renders Asomvel extremely likeable. Accompanied by a great video (which pays homage to the Ace of Spades cover) this eponymous track is two and a half minutes of metal heaven. Up next ‘True Believer’ is the latest single and beneath the musical maelstrom there’s a strong song sensibility with hooks that will ensnare any listener.

Like their heroes, Asomvel capture a moment in time when the energy of punk fused with giddying NWOBHM musicianship and foreshadowed the thrash boom. Like Accept and Anvil it’s not speed metal exactly but it’s knocking on the door. That’s just the case with ‘Runnin’ the Gauntlet’ which is a neck snapping slab of metal. Dripping with attitude ‘Reap the Whirlwind’ finds new singer Ralf sounding uncannily like Lemmy (as he does on most of this album) particularly on the vocal mid-section that mirrors what Motörhead did so well. ‘The Law is the Law’ is a real slow builder with an epic feel and provides a fitting centre piece before the crushing ‘Steamroller’ does exactly what it says on the tin and lays all to waste. ‘Every Dog Has It’s Day’ is packed full of neat time changes and is powered forward by new drummer Jani Pasanen who’s certainly left his mark on proceedings by attacking his kit with great gusto.

‘Railroaded’ sounds exactly like you’d expect from a track with such a moniker and ‘Smokescreen’ features a nice call back between vocals and guitar. While Asomvel aren’t reinventing the wheel or breaking new ground they’re living by the maxim: ‘If it ain’t broke, don’t fix it’ and with tunes this good there’s no repairs required. With no signs of slowing down album closer ‘The Nightmare Ain’t over’ races to a suitably cataclysmic finale and it’s a track that’s a real earworm which will rattle round your cranium for days.

The epitome of a rock n’ roll survivor guitarist Lenny Robinson is Asomvel’s sole original member. His nadir came in 2010 when former Asomvel vocalist Jay Jay was killed in a car accident and to whom every subsequent release is dedicated. In World Shaker Asomvel have created a fitting tribute to two of rocks most missed singers: Jay Jay and Lemmy. 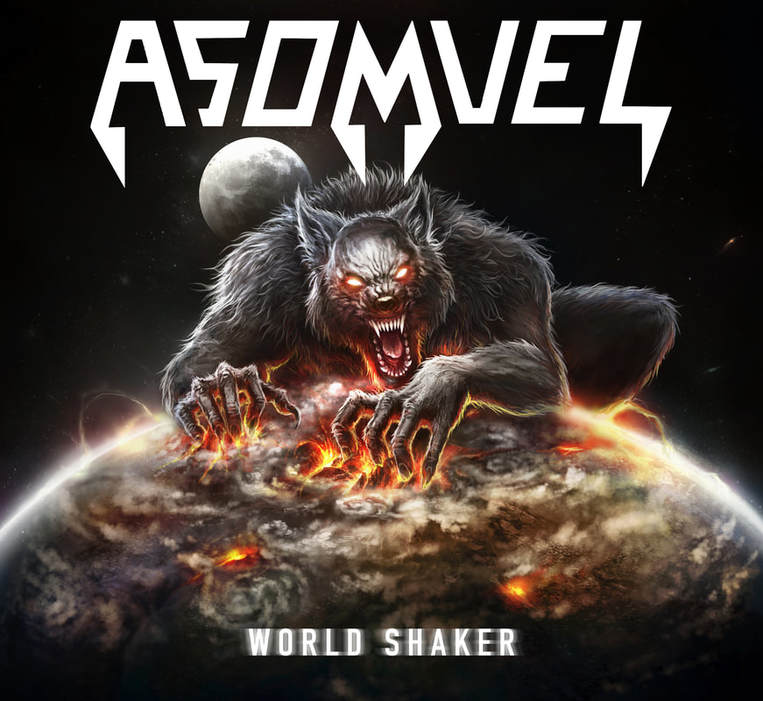