If any band was worthy of the title “supergroup” then it’s surely London’s very own Asia. Their original incarnation coalesced the talents of four exceptional musicians and read like a who’s who of progressive rock. Vocalist and bassist John Wetton plied his trade with King Crimson, guitarist Steve Howe and keyboardist Geoff Downes both served time in Yes, while drummer Carl Palmer was one third of the modestly titled Emerson, Lake & Palmer. This lavish set, Official Live Bootlegs Volume 1, spans four continents and almost 30 years and these five double live albums (containing all previously unavailable material) perfectly illustrate why Asia were such a hot ticket.

When Asia undertook their first US tour, they were riding the crest of a wave and an air of assured authority permeates this recording. Although only two months old their eponymous debut album was picking up momentum (on its way to selling 10 million copies) and its tracks from that record which predominantly comprise this first set. Opening shots don’t come much better than ‘Time Again’ and it succinctly sets out the band’s stall with Wetton’s bass anchored by Palmer’s thudding drums and Howe’s guitar tussling nicely with Downes’ swirling keys. Recorded a mere 11 days after their very first live outing this set evidences a band who’re surprisingly cohesive with only Wetton’s stage raps seeming a little uncertain.

Despite being a fan favourite Asia was lampooned for its commercial leanings, yet it was perfectly in tune with the times and, rather laudably, the band refused to rely on past glories and perform tracks from their collective pasts hence the debuting of ‘Midnight Sun’ (from the yet to be issued Alpha opus) to flesh out the set. Another bone of contention was the lack of progressive musings but, while subdued, they’re still evident, most notably in Steve Howe’s acoustic solo, ‘Clap’. But in an age that was polarised between synthpop and glam metal the masculine punch of ‘Sole Survivor’ still sounds refreshingly honest. Due to its success Asia was pillaged for single after single after single and perhaps the brightest of them all was ‘Heat Of The Moment’. It makes for a pretty raucous closer and that’s just where the band came in…

For those of us who came of age in the ‘70s and ‘80s bootlegs were very much a hit and miss affair. Often illicitly recorded on poor equipment they left a lot to be desired on the quality front so the title of this box set might be off putting for some. However, I’m pleased to report that the recordings presented here, recorded from the soundboard, are top notch (although this show from Worcester is a little muddy) but what this does share with those illegal releases is a warts-and-all approach. Unlike some “live” albums (think Lizzy’s Live and Dangerous) there’s been no retrospective tinkering or polishing and what you get is the authentic Asia live experience and the audience, prominent in the mix, only add to the excitement.

What started as a whirlwind in 1982 turned into a full-blown hurricane by the time Asia returned to the States the following year. Bigger stages demanded longer sets and while their sophomore album (Alpha) didn’t quite match the giddy heights of its predecessor it gave the band more material with which to woo adoring crowds. With a set list culled from both records it reads like a ‘greatest hits’ only with added oomph! from being played live. However, it’s a Carl Palmer drum solo during ‘Here Comes The Feeling’ that’s a real highlight and he sounds like an angry Thor throwing bolts of lightning. Marvel here at a band riding a tsunami and giving a rabid crowd exactly what they want.

In 2006, after two turbulent decades, the four original members of Asia made peace with themselves (and their pasts) and reconvened for a 25th anniversary tour, the fruits of which flowered at this show in Brazil. The first thing to note is that the band have aged like a fine wine; gone is the over-zealousness of their early shows to be replaced with a more measured approach and, with wiser heads, they sound all the better for it. Opener ‘Time Again’ appeared on the previous sets, but this version sounds the most definitive. Warm, luxurious and textured with Wetton turning in an exceptional performance (as he does on the whole album) ‘Wildest Dreams’ sounds much more progressive, and it seems the whole cosmos was aligned for Asia on this evening.

What makes this set extra special is the band’s decision to revisit their yesteryears and it contains four excellent ‘cover’ versions. Yes’ ‘Roundabout’ is presented in all its nine-minute glory and sits easily sandwiched between Asia classics ‘One Step Closer’ and ‘Without You’. ELP’s ‘Fanfare For The Common Man’ is welcomed like an old friend and it works precisely because Asia put their own stamp on proceeding whilst retaining the essence of the original. ‘In The Court Of The Crimson King’ requires little introduction while a surprise airing of ‘Video Killed The Radio Star’ vastly improves the original. It’s an overused cliché but, in this instance, it happens to be true, Asia sound like a band reborn. They’d hit a purple patch and if you need proof just listen to this live set.

By the time Asia hit Tokyo in 2008 they had released the Phoenix album (the first album with the original line-up since 1982’s Alpha) and due to their insistence on not playing songs from other incarnations of Asia Phoenix gave them a wider spectrum of material to draw from. While this set features many of the same songs as previous discs it nevertheless mixes things up nicely and, surprisingly, opens with ‘Daylight’ from their sophomore album. Other highlights include Geoff Downes’ beautiful rendering of ‘Bolero’ and Steve Howe’s amazing dexterity on ‘Clap’. Originally tucked away on the B-side (outside the UK) of their first single ‘Ride Easy’ gained a life of its own and here it is restored to a rightful position as the centrepiece of an Asia live show.

As with the other shows in this box set these two discs are 100% live and feature some stage ‘clicks’ (most notably during ‘Roundabout’) that are amplified by the Japanese courtesy of remaining respectfully quiet during songs, but these slight glitches only add to the charm and faithfully replicate the live feel. The second disc features three ‘covers’ (including a wonderfully bass heavy rendition of ‘Fanfare’) and a rare live outing for ‘Open Your Eyes’. Two tracks from Phoenix hold the crowd spellbound before they erupt wildly at the first notes of ‘The Court Of The Crimson King’. While many of tracks here are duplicated on previous discs it’s interesting to hear how they’re received in other parts of the world but wherever closer ‘Sole Survivor’ is performed it always goes down a storm.

By the time Asia played their homecoming gig at the HMV Forum in 2010 they’d released another studio album (Omega) and, after the reunion four years previously, they sound far more comfortable in their own company. Gone are they forays into previous bands songs to be replaced by Asia tunes and as a result they sound contemporary and vital. John Wetton in particular sounds vibrant and revitalised and delivers the lyrics to ‘Holy War’ with venom and then performs some impressive vocal gymnastics on ‘The Smile Has Left Your Eyes’. A Steve Howe solo is always a thing to be cherished and he delivers his magic on Vilvaldi’s ‘Lute Concerto In D Major’.

The second disc continues the good work of the first and kicks off with another track from Omega, this time ‘Finger On The Trigger’. Full of Palmer’s pounding drums and awash with Downes’ synths and when you factor in the close vocal harmonies you have a song made in heaven. While all these live sets are of a high standard (I don’t think Asia have ever turned in a bad performance) it’s on these two discs that they sound most at ease. The newer tracks become more vigorous in the live environment while the old standards are infused with a new life and, perhaps symbolising their new confidence, a break with tradition finds them performing ‘Go’ from Asia MK II (Astra) while a vivacious version of ‘Heat Of The Moment’ brings down the curtain in the best possible way.

Five double albums housed in a lovely open-ended slipcase with Roger Dean artwork, there’s so much to admire about this tactile box set. Like a musical time capsule Official Live Bootlegs Volume 1 offers an intriguing glimpse inside the musical development of one of progressive rocks most enduring bands. If you need an excuse to treat yourself for Christmas, then it’s all here. 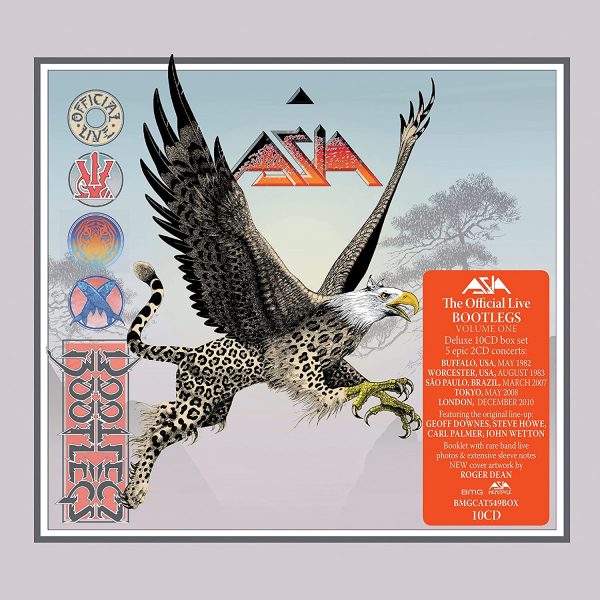