Formed in 1981 from the ashes of Yes, King Crimson and Emerson, Lake & Palmer (who new at the time that each would rise once more from those ashes) Asia were the ultimate in supergroups. Guitarist Steve Howe (Yes) and bass player/vocalist John Wetton (UK, King Crimson, Family) were paired up by John Kalodnor A&R executive at Geffen Records to work on a new project. They were later joined by Carl Palmer (ELP, Atomic Rooster, Arthur Brown) on drums and Howe’s Yes colleague and keyboard player Geoff Downes (Buggles) to form Asia. Their debut self-titled album released in 1982 went on to sell over ten million copies worldwide and topped charts around the globe. In comparison the follow up Alpha released the following year failed to match its predecessor’s sales (1,000,000 compared to 4,000,000 in the US) and critical acclaim. Still a huge live draw the Alpha tour kicked off in America, but things were far from well in the Asia camp. “Was he pushed, or did he jump” stories still abound in reference to the departure of John Wetton during the tour, but the result was that the second leg of the American tour was cancelled. But with plans in place for them to perform the first ever live broadcast between Japan and MTV in America in December Carl Palmer called upon Greg Lake his old sparring partner from ELP to fill the (very large) shoes vacated by Wetton. Although initially reluctant with the dates looming Lake stepped up. The resulting landmark concerts have subsequently been available on various bootleg quality CDs or on VHS (remember them?) over the years but now with this latest release Asia In Asia – Live At The Budokan Arena Tokyo, December 1983 fans can finally get to witness the concert remixed from the original master tapes in both audio and visual formats.

From the outset it is obvious that hiring Lake was a master stroke, although a few key adjustments had to be made he is more than up to the role. As expected, due to its universal popularity what you find during these Budokan sets is a very heavy bias towards the Asia album. In fact, seven of the debut’s nine tracks are represented here alongside just five cuts from their then current album Alpha. The Alpha tracks major on Asia’s optically themed tunes with ‘Eye To Eye’, Open Your Eyes’, second single ‘The Smile Has Left Your Eyes’ which shows off Lake’s vocals at their very best as he is enveloped in dry ice. These are joined by ‘The Heat Goes On’ and strangely the less well-known cassette only bonus track ‘Daylight’ which closes out the set. One curious omission is Alpha‘s lead single ‘Don’t Cry’ which on its release was the track which propelled the band back into the public eye and reached #10 in the US Billboard Hot 100. However, it is obvious why the earlier albums tracks still dominated the set with it’s singles taking up keys positions within this live set. ‘Only Time Will Tell’ exhibiting the bands trademark vocal harmonies alongside arena pleasers ‘Heat Of The Moment’ and ‘Soul Survivor’. Bulking out the main tracks are the obligatory solo performances by the three original members (sorry Greg! You had your moment in the dry ice). First up is Steve Howe’s acoustic ‘Sketches In The Sun’ showcasing his six string prowess and including sections which to this listener sound very much like the themes to Trumpton or Camberwick Green (those under 60 won’t have a clue). As if punk never happened the grandiose keyboard back line in possession of the former Buggles man is way over the top but still isn’t enough for Geoff Downes who adds both handheld keyboards and piano to his arsenal for his own ‘Ihiri – The Setting Sun/Bolero’ solo and finally following ‘Wildest Dream’ Carl Palmer gets his time to bathe in the excitable crowd reaction with his electronic pad, kettle drum and gong augmented centre piece. The film of the broadcast on the accompanying Blu-ray has a couple of songs omitted (‘Cutting It Fine’ and ‘Daylight’) and is where this release shows its age. The close-cut edit during the first few tracks gives a very 80’s “live in the studio” feel before the cameras eventually pan out to reveal what an enormodome the Budokan really is, as well as the guy who looks like he’s about to fall asleep during ‘Only Time Will Tell’. Add to that Downes’s headband and Howe’s dungarees and you get the full period effect. Despite that this is great band on top form in an iconic venue… a truly historic event.

Within the deluxe box set there are two CDs with versions of the set from both the main event transmitted on 6th December 1983 to the MTV American audience on one disc as well as a second disc containing an almost identical (I couldn’t spot any notable differences) performance from the previous night’s dress rehearsal. Alongside the CDs there is a 2LP coloured vinyl set (one yellow and one white 12” album) of the telecast concert and the Blu-ray including the concert in two formats, original broadcast and a laserdisc version with alternate camera angles. As if that wasn’t enough, you’ll also find in the box a 40 page 12” book with rare and unseen band photos, memorabilia and new sleeve notes, an exclusive metal/enamel pin badge, 2x Roger Dean A3 posters, 2x repro tickets, repro laminate, original VHS advert, 3x 8”x5” glossy band photos and other printed memorabilia all wrapped up in brand new Roger Dean artwork. For those frightened off by the £100ish price tag the main concert is also available on a single CD, 2LP gatefold sleeve vinyl or digital formats.

7. Only Time Will Tell

10. The Smile Has Left Your Eyes 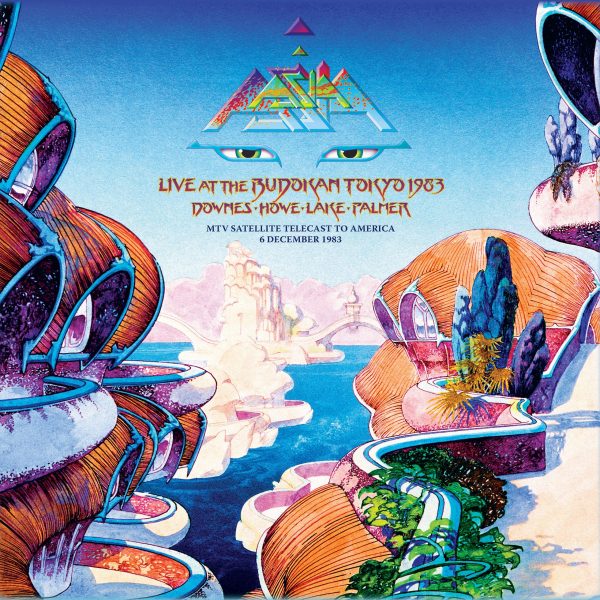