A gift from the Gods

To say Árstíðir Lífsins make music is a bit like saying Picasso was pretty hot on painting by numbers. This Icelandic trio are far removed from anything that usually touches the cloth of metal but this remarkable two-track EP is undoubtedly metal in spirit, if not in places sound.

The initial moments of the first track ‘Á helvegi’ are little more than a few isolated strings from a violin, creating a crypt of emptiness and an almost unbearable feeling of loneliness and that of being caught in some kind of abyss. Streams of somnambulant sonic tears make for an emotive and vulnerable platform from which to begin this 20-minute sojourn. The addition of what appear to be chants from Cistercian monks scarcely lighten the mood and by the time, after more than four minutes of these mesmerising mindgames, some deeply spoken luxurious prose break the ice, so to speak, quickly followed by a thunderclap that well and truly shatters the dissonant and distressed backdrop.

As ‘Á helvegi’ navigates deeper into its inner core, the full poetic power of Árstíðir Lífsins begins to illuminate the melancholic wilderness like a beacon, a stomping authority taking over as though a giant descending a staircase. With finely cut grooves by now opening up yet more aural avenues to explore, these enriching Icelanders unite as one in a composition that almost moves and terrifies in equal measure. Marsél has a wonderful tone through which he utters indecipherable vocal patterns of Old Norse, as lush as crush velvet, and when sandwiched between finely crafted guitar lines and intermittent drum interventions the overall effect is wonderfully uplifting.

As the track moves into the second half more familiar blackened riffage surfaces and the comforting vocals are slowly replaced by something altogether more feral and feisty. The ending is no less satisfying than the beginning as all senses are funneled down the same raging path into a blazing furnace of a climax.

‘Á helvegi’ has so much going on that the second of these two tracks, ‘Helgrindr brotnar’, has an almost impossible task to follow. So in many ways it’s best that it doesn’t try. This number has a different flavor but one that still pulls you inexorably inwards. Less ambiguous and steadier in the musical path it takes, ‘Helgrindr brotnar’ is nevertheless a ride during which for most of its path you have to hold on tight. Another tumultuous 20-minute epoch, and while the lines are thicker from the start, Árstíðir Lífsins’ compelling compulsion for soliciting Pagan chants over vacuous frozen strips means that the searing highs and plunging lows again interconnect like stars brushing past another in the far off galaxy.

The bellowed sustained chants conjure up visions of hooded monastic choirs although the vocals emanate entirely from the three band members Stéfan, Marsél and Árni. At times the chants graduate into a drone with the vocal output almost marrying up to the cacophonous rhythmic output.

The band are happy to refer to this their latest work as an EP although at 40 minutes many will consider it an album, despite just the two tracks. That probably isn’t too important anyway. What is are the magical Nordic qualities conjured up by Árstíðir Lífsins who through their momentous music help to sustain so much of their nation’s fascinating mythological heritage. 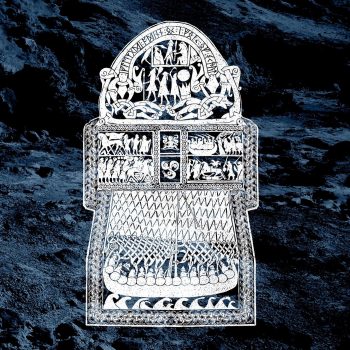