You might need to whack the central heating up when listening to the new album from Ars Veneficium. The cold winds that blow through this release howl like a banshee. The blasphemous Belgians impressed many with their debut album, The Reign of the Infernal King, and this follow-up is another finely crafted serving of occult-laden black metal.

There’s an at times primal quality to some of these songs, once we’ve got past the sinister choral chants of the opening intro ‘Hymns of Chaos’ which carries elements of Batushka in tone and texture.

The feral explosion ignites on the raging ‘Wrath of Life,’ but after the initial bomb-blast a discernible chug fights its way through the debris with some clinical guitar cuts coming in further down the line. ‘Devour the Light’ maintains the energy levels which are ratcheted up high, the riffs almost fighting amongst themselves to reach the line first, but amidst this thumping nihilist noise Ars Veneficium show their quality by rolling out a perceptible groove, albeit one lathered in tar.

The vocal style of S is at times is not dissimilar to Nergal but overall Ars Veneficium are faster and more aggressive. ‘In Sin, Bred By Madness’ is a monstrous track, launching itself into a repetitive thudding beat from drummer Norgameus that grips the song in a vice-like grip. No less epic is the dual-force ‘De Luiaard Heerst,’ on which Ars Veneficium frontman S is joined by V.Priest (Acherontas/Shibalba) who adds spoken foreboding prose along with screaming Greek vocals that would test the foundations of The Acropolis.

Throughout the album the mood is hung heavy, as though staring death in the face. At no point do the fires burn more fiercely than on the combustible ‘In the Fires of Eternity’. Although it feels as though you’re being attacked from all angles, the Belgians do at least have the courtesy to throw you the occasional liferaft in the form of some inspired riffs.

Track seven, ‘7’, is the shortest piece, intro aside, and allows S to catch his breath as the rhythm section are given their moment to shine, although that’s possibly overstating it as the three minute diversion remains a charred cut even allowing for the more expressive guitar patterns.

Founding members S and guitarist Ronarg continue to sail their ship through the choppiest of dark waters and this sophomore release confidently cements Ars Veneficium’s reputation as one of the shining lights of the otherwise dark underground, their qualities again evident on the rasping album closer ‘The Flames of Endless Yearning’. 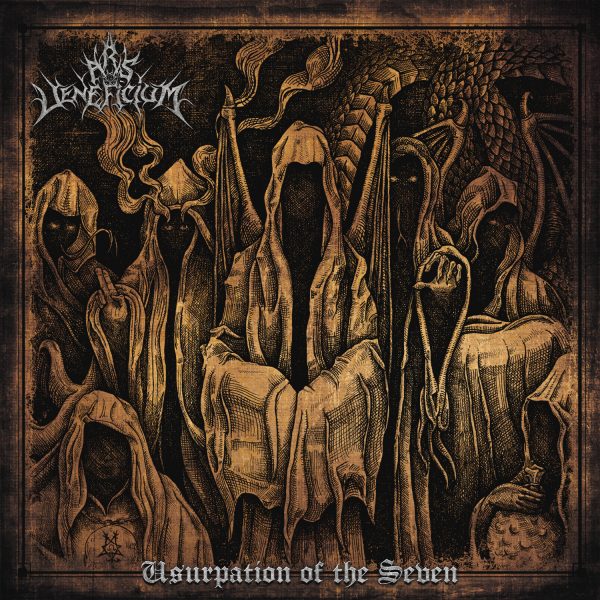