Paul Castles is scorched by the flaming fires of Ars Veneficium’s debut album The Reign of the Infernal King, released by Immortal Frost Productions on 26 September 2016

This is the first full length release from Belgian black metal aggressors Ars Veneficium and is arguably one of the most satisfyingly segmented slabs of black metal set before the great unwashed this year.  The Reign of the Infernal King follows on from a couple of EP releases, one The Will, The Power, The Goat, a split venture with Finnish satanic son Azaghal.

For non-scholars, the band’s Latin name translates as ‘Art of Poisoning’ and their debut full length begins with an eerie intro that leads us wide-eyed into a choking cauldron of evil. This quickly gathers momentum with ‘Damnation of the Soul,’ a tempestuous firebreather of a song carried with some metronomic fuzzed up riffage, although towards the end that spirals completely out of control as though being pulled screaming and shouting into a blackened pit. With the gloves not so much off, as shoved down your throat, an incendiary ‘Fallen to the Realm’ brooks no questions as its barbed and bloodied attacks wrestle you to the wall, leaving you spluttering for air as the sonic charges ignite all around you.

The mood implausibly turns infinitely more sinister on ‘Angel of Angels’ as deathly cries spiral angrily over abrasive guitar riffs, the tempo deliberately restricted to heighten atmospheric levels before the trapdoor is triggered and everything comes together in a blasphemous battle fueled by vicious machine gun drumming from dynamic new skin slammer Norgameus. 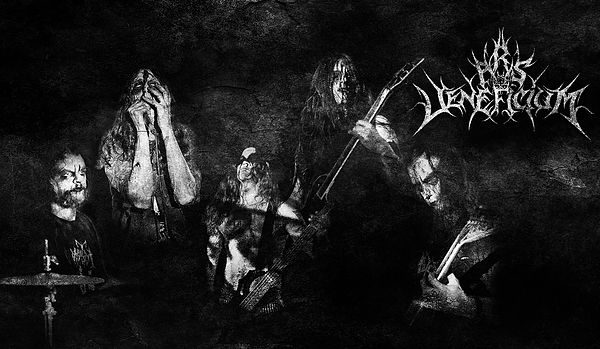 ‘Extinguished are the Candles of Holiness’ opens quite magnificently with a minute of conversation between the forces of good and evil which ends with the seminal exchange of  ‘I am the shepherd, here to help you find God’s forgiveness….’ To which the curt retort comes forth… ‘You are not the shepherd, you are the sheep’. At which point the flames soar up as though paraffin was pouring down on them as a rat-a-tat backdrop drives desperately sinewed cries from frontman S with a pummeling rhythm helping to cut through the deathly detritus.

‘As Flames Spread Into Chaos’ does exactly what it says on the tin as Ars Veneficium maintain a venomous and unforgiving momentum. Album closer ‘Bringer of Light’ is something of an oxymoron as the darkness descends in droves once again. A fevered and agitated charge drags you screaming into the coldest of corridors, a feint church bell in the distance no match for the battery of relentless riffs as the atmosphere again succumbs to a blasphemous barrage of frenzied skull crushing blasts.

Ars Veneficium seemingly set out to create a hothouse of hatred with this album in which all goodness is crushed. Job done. 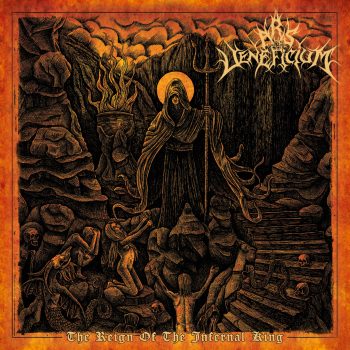