‘Headway’ is the sophomore album by Ariel Posen, the Canadian roots singer-songwriter/producer/slide guitarist/ jack of all trades which finds him, according to his PR blurb, “taking stock of his personal and musical progress”.

The video above will pretty much clue you in on what to expect. Sensitive, mellow Americana. Relaxed vocals lead the way, a nice groove is established, bringing to mind echoes of JJ Cale. The guitar is turned up surprisingly loud and elbows its way to the fore. The inevitable solo is Cooder-esque and wraps itself around the melody. It ends, subtly, with a whisper. It’s nice, it’s good and yes, I know these are somewhat bland adjectives…that’s kind of the point.

‘Coming Back’ continues along similar lines. It has a slightly more soulful feel with more of those whispered Hall and Oates vocals. There are hints of (and I apologise in advance) Ed Sheeran and his ilk in here too but always with that turned-up-too-loud guitar lurking in the background, just waiting for it’s opportunity to burst out of hiding and go for the kill.

Touchstones, references begin to appear with regularity. Tom Petty is a clear influence in the haunting, silky, countrified ‘Carry Me Home’ while CSNY vocal harmonies and a sneaking first glimpse of Jeff Buckley appear in the blue collar soft rock of ‘Did You See It Coming’.

Buckley’s vocal spectre starts to appear with more regularity as the album progresses. The vulnerability, the musicianship. Most of these songs, you realise, are about luuuurve, and usually it’s going slightly wrong. Relationships are at quiet crisis points…you only have to look at the song titles. Introspection is all, we are most certainly not in Steel Panther territory. Do I love her? Will this go the distance? Do I want to be here? Does she want to be here? Where is here? “I thought you were wrong when you said it was over” croons Posen at one point, pretty much summing up the themes of the album…followed by another slide solo.

‘It’s You’ has a nice bluesy acoustic intro – “You can love me, you can leave me…it’s 9pm and you’ve gone again” the mope is strong here. ‘I’ll be Finding You’ has a gentle Calypso vibe with perhaps a hint of Beatles in there, oh, and Jack Johnson with that reggae-lite, island groove – a nice sunny backdrop while we await the solo and Buckley vocal tremor. I think he might be losing in love again lads.

‘I’m Gone’ offers us the albums fiercest, rockingest moment. There’s still a fair bit of self pity going on (“I’m down and out in the evening, I’m the only one that nobody sees”) but the guitars are beefier and the Derek Trucks stylee solo kicks up some serious Laurel Canyon dust. It briefly averts the slight sameness of the rest of the album, a couple of tracks could maybe have been diverted to an EP.

We finish with a duo of soulful, RnB-ish commercial narcoleptic lopes again. They sway and float, dripping with melody and more of that trademark guitar. So there we are, you’re left a tad bemused, not quite knowing what to make of it all. Don’t get me wrong, this is a fine album – well written, produced and performed and Posen clearly has some serious chops as a guitarist – but the ingredients don’t quite mix together, they jar, they sour each other, it doesn’t quite hold together as a cohesive album. George Harrison (another clear influence) married his pop writing genius to his slide guitar playing, it can be done. But George Harrison was, y’know George Harrison.

Rolling Stone magazine described Posen as “a laid back Springsteen”, but that’s not right. The aforementioned JJ Cale comes closer to matching that description. Posen, meanwhile, has yet to decide who he is. That guitar, as gritty and expressive as it is, doesn’t fit with these songs. They are R&B, blue-eyed soul, love laments -they’re chilled, slow, glass-of-wine candlelight songs. But then there’s that guitar – over amped, bristling, aching to let loose. The solos, as good as they are, feel bolted on Frankenstein-style. It’s an album made by two different artists, the Sheeran pop idol and the explorative guitar hero. Posen needs to find a workable medium or go in one direction or the other. He needs to take risks, find a way to write songs that accommodate these disparate styles and if he can, then album three will be quite the thing.

Released by Soundly Music on 5 March 2021 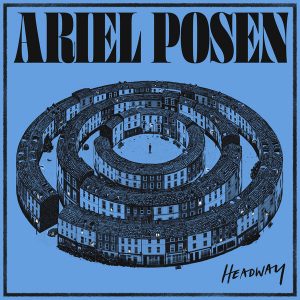