Like its sister festival, 2000 Trees (held in Gloucestershire earlier this year), ArcTanGent has a friendly, family vibe. Held just south of Bristol it’s a dream for those who’s rock tastes veer towards the eclectic as the organisers have covered the whole spectrum of heavy. With 105 bands spread over 5 stages the only real problem you’ll face will be which bands to watch. However armed with a clash finder and a fleet pair of feet the close proximity of the stages means you can catch most of your favourite acts. Below are some of the bands who rocked my weekend:

With a sound guaranteed to wake even those with narcolepsy Big Lad get the festival going to an earth shaking start. Their sound is a mixture of electronics and organic drums and, used in tandem, they make a powerful combination. Metalheads, punks and hardcore kids all revel in their sound as ‘It’s a Challenge’ caps an impressive set. Crowd surfing on a Thursday afternoon? It could only be Big Lad!

Floral are another duo who make a big sound with guitar lines that cascade and which have a prog feel in their rich flourishes. Latest video release ‘Maybe Not One Day’ is well worth checking out and points to a bright future.

Mammoth Weed Wizard Bastard are bathed in a suitably demonic, green light and are welcomed like returning heroes. Armed with riffs that could crush a man their sound captures the essence of their native Welsh environment. The doom/psych/sludge hybrid they pedal is immensely weighty yet Jessica Ball’s ethereal vocals float ghost like on top and it’s an intriguing juxtaposition.

Creating huge monolithic structures from sound Bossk perform against a background of stars and the proceed to take the audience on a 45 minute musical journey. Hypnotic and relentless without being repetitive guitarists Alex Hamilton and Rob Vaughan fire well off each other while vocalist Sam Marsh confidently commandeers centre stage. Triumphant.

Pigs (x7) operate with that classic Sabbath swing and each drumbeat deliver like a well aim punch from a pro boxer. Stomping like Goliath on a rampage they make full use of the quiet/loud dynamic as they subdue the crowd by beating them senseless with humongous riffs.

Carpenter Brut is led by the illusive and enigmatic Frank Hueso who deliberately keeps a low profile to place the emphasis on the darkwave, heavy electro beat sound. However one thing is easily ascertainable and that’s Frank has a fascination with the 1980s. This is solidified by his using Toto’s ‘Africa’ as an intro and the band take to the stage and open with the title track from his latest album ‘Leather Teeth’. By way of a calling card ‘Leather Teeth’ contains all the essential darkwave ingredients as the band perform against a backdrop of horror films and faux metal videos. ‘Roller Mobster’ follows along with ‘Beware the Beast’ which playfully deconstructs the whole glam metal genre, but it is done with such attention to detail you suspect Frank is a secret fan. By fourth track, ‘Turbo Killer’, even those with an aversion to electronic sounds are grooving to the infectious beats. ‘Le Perv’ brings the set to an end but the band return for a well deserved encore on which they take Michael Sembello’s’ ‘Flashdance’, make it infinitely heavier and cause a huge sing-a-long.

New York’s Coheed and Cambria status as headliners was never in doubt and, although Carpenter Brut set the bar high the band grab the bull by the horns and knuckle down to what they do best. Opening with three tracks from their critically acclaimed new album: ‘Prologue’, The Dark Sentencer’ and ‘Unheavenly Creatures’ all serve to crank up the tension. Coheed and Cambria are prog in the truest definition as the band explore musical boundaries and mix genres incorporating elements of hardcore and alternative rock into tracks like ‘The Gutter’ and ‘True Ugly’ with an elasticity that suggests a jazz sensibility. Mainstay vocalist and guitarist Claudio Sanchez is the linchpin but it’d be unfair to single out any member as the group lock together like a jigsaw but it’s great that drummer Josh Eppard is back in the band with his metronomic style. ‘The Pavillion (a Long Way Back)’ brings the set proper to a conclusion but the guys return for a well deserved encore in the shape of ‘Welcome Home’ and it looks like the band have found their spiritual home, here at ArcTanGent.

Cattle are a band who can rival early Black Flag for intensity and, as torrential rain turns the ground to mud soup, the band fill the tent, and not only because everywhere is sodden. There’s a real buzz surrounding Cattle and their unique brand of hardcore that’s pushing boundaries. A brutally stark 30 minute set wins the bands many new friends.

Slow Crush have a sublime indie sound not dissimilar to The Sundays. Ethereal and dreamlike it’s quintessentially English in its joyful melancholy and it provides the perfect soundtrack to a blustery afternoon.

Another band at the mercy of the weather are Toska. Their set is plagued by power outages forcing abrupt stoppages. It’s a real shame because they’ve developed exponentially over the past year displaying a real musical development but it’s to the bands credit they continue stoically and chug out some fine riffage.

Augmented by some fine saxophone Puerto Austral evidence that classic emo sound. Like American heavyweights Foxing they play a style of rock that’s simultaneously minimalist yet full and it’s hard not to like Puerto Austral.

Experimental rockers Battles are worthy Friday night headliners. Hailing from New York City this duo remind me a little of Talking Heads in their experimentation and employment of world music. Opening with ‘Fort Green Park’ there’s a pleasing lack of bells and whistles to their performance which brings the music to the fore and with tunes this good that’s exactly where they should be. ‘A Loop So Nice’ follows along with ‘They Played it Twice’ as Battles perform with just the right amount of bemused nonchalance. It’s a career spanning set that dips into all sections of their back catalogue with ‘Titanium 2 Step’ and ‘Summer Simmer’ being definite highlights. Dummer John Stainer provides a solid foundation over which Ian Williams lays some guitars and keys. Closing with ‘Last Supper on Shasta’ then an encore of ‘Ambulance’ Battles ensure the day ends on a high. 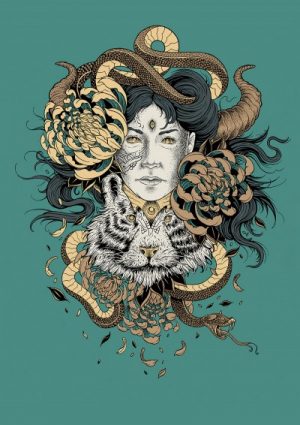 Sugar Horses create huge walls of sonic angst as ‘Your Degree is Worthless (and Your Parents Hate You)’ evidence. However the band explore a wide range of sonic dynamics as ‘Drudge’ caps a lively set.

Wild Cat Strike have more than a touch of Americana in their sound that captures the essence of nature, vast bruised skies and huge wide open plains. The band interact well and, with all four adding vocals, adds to their feeling of enormity. The title track from new album Rhubarb Nostalgia is a definite highlight.

Local band The St. Pierre Snake Invasion hail from Bristol and hit the stage with the force of a tornado. And like a maelstrom they don’t let up for 30 minutes. With a modest frontman (!) the guys proceed to deliver banger after banger with ‘Casanova Cain’ being a definite highlight. The band have an encompassing sound that pulls in different, unexpected elements, as within the hardcore assault there’s even a short burst of dub reggae. Sounds strange but they make it work.

Gender Roles hail from London and are armed with cracking tunes like ‘Plastic’ and ‘Bobble’ which display a strong melodic sensibility. There’s something of Nirvana in their modus operandi as angular and brittle guitars build towards a full, monumental crashing crescendo. If a song like ‘Skin’ doesn’t bring national recognition I don’t know what will.
Made up of members from Conjurer and Pijn, Curse These Metal Hands could be construed as something of a supergroup. As a side project they don’t take themselves too seriously and they turn in a good natured performance and their effervescent nature juxtaposes with the crushing sound.

The Invalids are simultaneously catchy and complex. Math rock with cool harmonies as the two guitarists good naturedly rut like stags while the bass player is all over the fretboard like a rash and drives the songs forwards.

Making their UK debut at ArcTanGent are Taiwan’s Elephant Gym. Some technical problems plague their first song ‘Shower’ but by next cut ‘Underwater’ they’re firmly in the groove…and what a groove as bright guitar lines shimmer against impossibly complex rhythms ensuring they remain both distant and accessible. A raucous rendition of ‘Finger’ renders the band extremely likeable and evidences a lot of fun in their performance.

GNOD certainly haven’t come to take prisoners. Mixing doom and speed to great effect their sound is akin to playing your Black Sabbath albums at 45rpm. Two drummers ensure a huge sound which anchors the crushing brutality of the riffs and their amphetamine charged take on the doom genre is refreshingly original.

Another band who scream originality are Sweden’s Cult of Luna. The whole notion of two drummers is under used in metal which is a shame because the result can be overwhelmingly powerful and that’s certainly the case with Cult of Luna. Opening with ‘The Silent Man’ this seven piece band play a fine post-metal/sludge hybrid that’s repetitive and weighty. ‘Finland’ is up next from their excellent Somewhere Along the Highway opus as the band continue to sculpt sky-scraping sonic sculptures. The bands shunning conventional song structures makes for a rewarding listen. ‘1: The Weapon’ from Vertikal follows as ‘Nightwalker’ and ‘In Awe of’ bring a near perfect set to fruition.

By way of an intro Meshuggah tease the crowd with some ‘80s cheese (‘Lady in Red’, ‘Careless Whisper’) which only makes their eventual arrival all the more heavy. Opening salvo ‘Parvus’ (from obZen) sounds like an artillery shelling and there’s no sign of a peace treaty as ‘Born in Dissonance’ and ‘The Hurt That Finds You First’ are fired in quick succession. Well into their third decade Meshuggah have never stopped exploring the boundaries of metal and while the results often divide their fan base you have to admire their scruples while many of their peers are playing it safe. Tonight’s set displays several of their facets from ‘Future Breed Machine’ to ‘Straws Pulled at Random’ and ‘Clockworks’. Each band member stands almost statuesque as if solidified by the power of the music yet each musicians omits a powerful aura. Meshuggah seem to run in tandem on two tracks as the complex polyrhythms cradle the brutally simple riffs. ‘Bleed’ hits with an industrial precision before ‘Demiurge’ brings their set to a suitably cataclysmic conclusion.