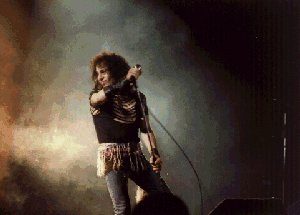 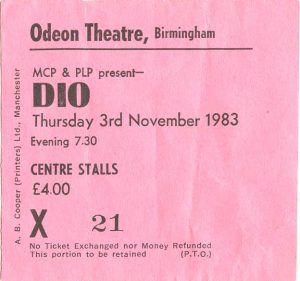 If you wanted to attend a Rock or Metal gig in Birmingham back in 1983 then chances are you would be heading to Birmingham Odeon which was a permanent fixture on tour schedules in an era when bands would routinely play twenty or thirty shows around the UK. After his departure from Black Sabbath the previous year, 1983 saw Ronnie James Dio launch his own band which featured trusty sidekick Vinnie Appice on drums, former Rainbow cohort Jimmy Bain on bass and hotshot young Irish guitarist Vivian Campbell. For the live performances they were also joined by Claude Schnell on keyboards, albeit on the bands early tours he was hidden side of stage. 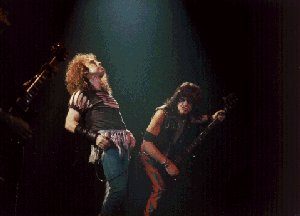 After the release of debut album Holy Diver in May the band first appeared on a UK stage over the August bank holiday weekend with an incendiary opening set at the Monsters of Rock festival. And so there was much anticipation for their UK tour which saw Dio not only playing tracks from Holy Diver but also found the singer his revisiting former glories with both Rainbow and Sabbath for a show that truly was all killer, no filler. Holy Diver was the record that fully unleashed the potential that RJD had desired as he was now the main creative force for the first time in his career and, along with Rising and Heaven and Hell, it would go on to be a huge influence on the Rock and Metal scene for years to come. A few months after their live debut Dio were back for their first UK tour and with ‘Rainbow in the Dark’ released as a single to coincide with the dates. 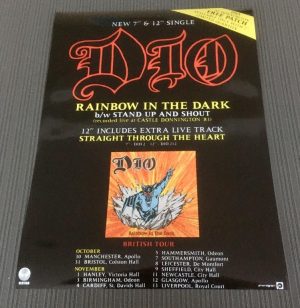 And so the denim and leather clad hordes duly packed out the Odeon and witnessed the band explode out of the gates with the galloping ‘Stand Up and Shout’ led by Ronnie’s lung-bursting screams. Appice ‘s huge drum sound kicked off ‘Straight Through the Heart’ and Campbell nailed solo after solo as the band fed of the enthusiasm of the crowd who became ever more vociferous as the set progressed and by the time  they reached ‘Stargazer’ and ‘Heaven and Hell’ Ronnie was leading his flock through one raucous sing-a-long after another. The iconic keyboard hook led into an irresistible ‘Rainbow in the Dark’ and after an electrifying ‘Evil Eyes’ the show came to an end with the huge ballad ‘Don’t Talk to Strangers’. Dio the band were on fire during those early tours and it was a privilege to witness the raw energy and power from all concerned. Some thirty five years later the show still leaves a strong impression. RIP Ronnie James Dio and Jimmy Bain and thanks for the memories. 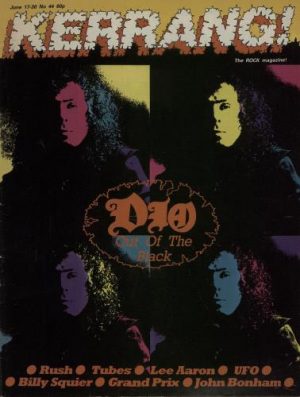 Stand Up and Shout

Straight Through the Heart

Shame on the Night

Children of the Sea

Rainbow in the Dark

Man on the Silver Mountain