As successive generations discover the joys of metal played at blistering speed the thrash metal scene has never been healthier. Archangel A.D. are amongst the new breed of thrashers who’ll ensure a bright future. Hailing from Edinburg, Texas, the band have a sound that harks back to the glory days of thrash: imagine the meaty riffs of Testament colliding head on with the technicality of Megadeth and you have something approaching Warband. However Archangel A.D. are far from generic as elements of doom and groove metal are incorporated to add some variety to proceedings along with the unbridled aggression and neat time changes you’d expect from the genre.

Opener ‘Unto the Evil’ comes racing out of the blocks with a riff designed to ensnare any wayward listener. Aided by a bold production the bass is prominent in the mix giving a full sound while the guitars form walls which entomb the listener. Epic in its sonic manipulation the band employ quieter passages to accentuate the heavier and vocalist Justin Lopez (who also doubles as bassist) shadows the sonic swing.

‘Blightning’ is pure adrenaline soaked thrash with the accelerator pinned to the floor. Fans of air guitar will adore this track as the solos just keep coming. Like Judas Priest’s ‘Painkiller’ just when you think the guitars are spent they kick back into life. Six stringers Jacob Garcia and Matthew Karr trade licks like men possessed each daring the other into more excessive shredding until the doppelgänger effect is achieved.

The perfect soundtrack to global apocalypse ‘Warband’ is epic as a title track should be and like a Sherman tank it crushes all in its path. ‘Enter the Temple’ is an instrumental very much in the vein of Megadeth’s ‘Into the Lungs of Hell’ with complex guitar lines interweaving to create an intricate web. ‘Evil Dreams’ sees the band veer into doom territory with a riff that Tony Iommi would be proud of. It crawls along in Cathedral and Candlemass fashion with drummer Edward Vera Jr. delivering each beat like a punch. A six and a half minute pummelling the track creates a tangible claustrophobic feel and five minutes elapse before the first solo kicks in, slowly crawling from the wreckage.

Like a greyhound chasing a hare ‘Metal Horde’ brings the EP to a speedy conclusion and it’s the kind of song that’s sure to set mosh pits alight the whole world over. Archangel A.D. have a sound that recalls the glory days of thrash but tempered with a contemporary edge and while they’re not reinventing the wheel Warband is an impressive debut and promises much for the future. 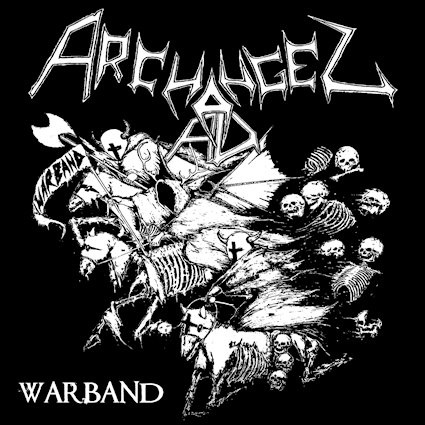