It’s been three years since the Dames of Darkness Festival graced the stage of The Robin, and although this wasn’t actually billed as a return of The Dames, Apparition chose to hold a launch party for their fine new album that certainly looked and sounded like the festival was being revived. Whatever the billing, it was certainly good to see a such an event back on the calendar.

Owing to some confusion over start and door opening times, I wasn’t able to get to the venue to see opening band The Loved And Lost, instead, Alice In Thunderland were well into their set when I finally made it, but what I did manage to see of the band was impressive. Passing over the issue of the band’s name (there are a few other bands around with the same name for a start) they sit more at the melodic metal end of the spectrum, rather than full on symphonic metal, and are a good accomplished band. Kala is a talented singer, and it was a real pity I wasn’t able to see more of the band, as what I did see was very listenable. One to watch for the future.

There has been a buzz about Control The Storm  in certain circles for a while now, and for a lot of the time in this set I can see why. Their mix of Power, Symphonic and occasionally Progressive Metal works really well, and in Firouzeh Razavi, they have a singer with a fair amount of talent and personality. As impressive a set as this was most of the time, the band were hampered by a slightly indifferent mix, and one of their newer songs, ‘New Era’ showed the importance of getting this right. The keyboards were inaudible a lot of the time, but when you could hear them, they added an awful lot of colour and depth to the sound. I might suggest that as the third band on a six band bill, and with a limited amount of set time, using some of it up on a piano solo, prior to an otherwise very impressive slower song, is probably not making the best use of it. Quibbles aside, a good set from yet another band who are well worth checking out. 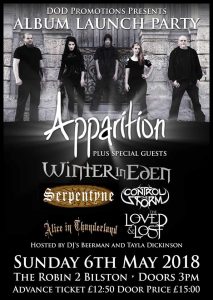 It was possibly a surprise to see Serpentyne only third on this bill, as they regularly headline their own shows at the Robin, but they added some interesting variety to the show, especially as they wear their own version of period costume and mix folk instruments with more traditional rock ones. Unfortunately there were one or two more issues with the sound in the early part of the set, with the hurdy gurdy overpowering the other instruments in the mix, but this was quickly rectified and things settled down. The obvious point of reference for Serpentyne is a band like Eluvietie, with their folk elements woven in with metal, Maggiebeth Sand’s more operatic vocals, for instance, bear obvious comparison to Nightwish, but when Silvia Crastan’s fine violin playing comes to the fore, there are even echoes of the wonderful Solstice. Their set included some lengthy instrumentals, including a bagpipe solo, but that aside, these songs did show what the band are capable of, including the guitar playing of Lee Willmer and the bass of Nigel Middleton, but while I don’t know if there were issues with the onstage sound, the vocals weren’t so assured and often sounded quite nervous. Regrettably the technical issues returned in the last part of the set, when the hurdy gurdy gave up completely for the last song. The band completed the set, but overall, this wasn’t the day for Serpentyne to shine.

At the last Dames of Darkness show, Winter In Eden were struck by ill luck when singer Vicky Johnson lost her voice on the day of the show, but the remaining members recruited some guest vocalists and in the end it was something of a memorable show in its own right. Since then, with family and real life taking precedence, this was the band’s first show for nearly two years, but in all honesty, you would never have guessed that from this set. Opening with ‘My Embrace’, it seemed almost indecent that the band could be this crisp and tight after such a long lay off. ‘With Intent’, with its Sabbath-like riffs also impressed as did ‘Stolen Fairytale’, and while the band as a whole played a terrific set, it was striking how much energy Vicky Johnson put into the set, her vocals as good as they’ve ever been, and putting in a performance that deserved a much bigger stage. The band have a new album in the works, so hopefully we’ll get the chance to see the band much more often in the future. Winter In Eden were easily the best band on the whole bill.

The return of former vocalist Fiona Creaby seems to have given Apparition something of a new lease of life in the last couple of years, and their new album, ‘The Awakening’ has received some very positive reviews. Performance wise as well, this looked to be a pretty capable unit, and it came as a surprise when Fiona revealed she had been suffering some problems with her voice, which ultimately meant they had to cut their set short. She certainly had given no obvious signs of any issues, as she impressed throughout the set. There was some nice light and shade in the songs, ‘Eternity’ for example took a welcome turn into symphonic metal’s gothic roots, but in terms of presentation, it struck me that the band made a couple of missteps that broke up the rhythm and impetus of the show. The ballad’ Home’ for example, slowed things down a little too much when the overall set was gathering speed, and it’s a little offputting to see the band just standing around while the keyboard backing track is playing and there’s an unused keyboard at the back of the stage, especially when, in ‘Hidden In The Dark’, guitarist Amy Lewis, who had been a good foil for Fiona in working the crowd, and putting something in to the presentation, accompanied Fiona on that very keyboard. The set did finish on a high note, with the new version of the anthem ‘Dames of Darkness, which ended the show on a fairly high note.

As ever, much praise is due to Dave Homer and his team for organising what is always a well run and enjoyable event, that I genuinely hope is a regular in the diary for some time to come. On this occasion, Winter In Eden were the real highlight, although there was a lot to like about Apparition, Control The Storm and Alice In Thunderland. Serpentyne were perhaps the wrong band for the show, although they were unlucky with the technical issues, but that shouldn’t detract from what a good show the whole thing was. See you next year, hopefully.