Poland’s prodigious Black Metal output is up there with any European country thesedays so only those with a touch of quality are able to really get their message heard. So full marks then to Apatheia whose impressive debut album Konstelacja Dziur has just been released, as with so many of their subterranean compatriots, via Godz ov War Productions.

Although a new name, Apatheia don’t lack experience and singer and guitarist Vos, will be known to those with an ear to the Black Metal underground, through his impressive solo venture Absque Cor whose album Wędrówkę Haniebnie Zakończyć we reviewed earlier in the year, here.

While taking their train of thought from the Norwegian giants of the genre, complete with a layer of corpsepaint, Apatheia avoid falling into the trap of being copycat clones. The spirit is Scandi but the power is reassuringly Polish, as evidenced through the emphatic opener ‘Odmętnia’ in which drummer Anünn delivers a relentless tirade of ferocious blastbeats.

On the following track ‘Ślepe Oddanie’ the Polish sticks warrior is equally robust but within the frenzied pummeling some defining grooves start to emerge as Apatheia begin to show that their blackened assaults are multi-faceted. Vos chooses his moments, allowing the music freedom of expression at times, happy to take a backseat as his guitar combines with a firm bass stance from co-vocalist Herr Mann.

‘Zimna Krew’ offers a more atmospheric angle from which Apatheia can build momentum while never losing any intensity.  Some neat solo work from Vos is a welcome punctuation point although the infernal satanic fires are never far from reach. The frontman is throatier than a frog with a dry larynx on the more doomladen ‘Złudzenie Życia’ in which the tempo occasionally eases off before Anünn once more goes into blastbeat overdrive with the smooth execution of a Formula 1 driver racing through the gears.

‘Boże Ciało’ kicks into life with a real military stomp before a medieval hook pulls you into a sinking quagmire through which Apatheia throw in some immense grooves to keep you afloat. Vos allows the mood to continue to darken to the point where you begin to ask is this one an instrumental but then having picked his moment he plunges into the cauldron headfirst. At almost 11 minutes long ‘Boże Ciało’ gives Apatheia the freedom to express themselves, making full use of the broader soundscape.

The following couple of tracks quicken the pulse before another 10-minute beast, ‘Supernowa,’ brings things to a close, blastbeats and some raging riff attacks ensuring a fiery finish. Vos is a man who can do little wrong at present and under his stewardship Apatheia have entered the top echelon of Polish Black Metal from the off. 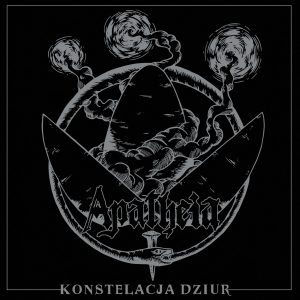