Well, this can’t be easy an easy square to circle. Anthrax have consistently been the ‘out there’ contingent of the 80s Big Four of thrash metal, with their then- contemporaries, particularly Metallica, largely outstripping them in popular and musical influence. Despite then-ground-breaking forays into rap-metal (before it was even a thing) and their consistent refusal to take themselves too seriously, the band haven’t garnered the same plaudits and respect as some of the other guys who made it all happen in the first place.

The 30th anniversary re-issue of their fourth album ‘State Of Euphoria’ is possibly a chance to change that. The 2-CD/vinyl release is billed as drummer and ‘archivist’ Charlie Benante’s brainchild, who’s gone through all of the available recorded material to fully document the work that went into creating the album that came out around the same time as more widely-recognised LPs like ’…And Justice For All’, ’South Of Heaven’ and ’So Far, So Good, So What?’.

The album itself is as good as it’s ever been. In the midst of the rest of the Big Four trying to adjust to major-label influence or ‘do something new’ (potentially for the sake of it), ’State Of Euphoria’ has an ongoing hardcore influence that’s arguably the most important thing that Anthrax bought to the heavy metal table. In between Scott Ian’s punishingly syncopated guitar lines and the locked-in rhythm section of Benante and Frank Bello there’s a shin-kicking anger that was missing from similar releases of the time (witness ‘Misery Loves Company’ or ‘Who Cares Wins’).

Now, the second ‘disc’ (if anyone buys hard-copy any more…and you should, despite what follows; odds are that some actual money flows back to the artist, and record stores are awesome).

Sorry, this is a bag of shit with a diamond in it. A French-sung version of ‘Anti-Social’, some asinine radio interviews, a bunch of studio out-takes that might have been vaguely interesting to the most hardcore of fans if they’d been accompanied by video, and a few decent live versions of some of the album tracks…but hell, the energy on ultimate live track ‘Finale’ could power the Earth for a decade if it could be (re)captured. And there’s even a touching shout-out to us “limey fucks” at the end of it, in true Anthrax ‘don’t-give-a-fuck’ style.

A great album, a relatively poor re-issue. If there’s nothing better found in the archives for ‘Persistence Of Time’…actually, throw it out there anyway. Just leave out the ‘failed-takes-in-the-studio’ stuff, that belongs on Youtube for lesser acts. Just sayin’. 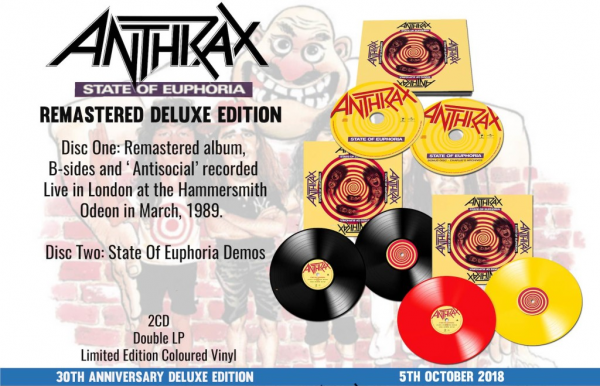