Following the kind of applause that such thrash legends deserve when they walk out on to the darkened stage, Jeff Waters and co. open the evening with ‘Betrayed’, giving it everything they’ve got. Heads are banging, horns are held high, and air guitar – yes, really! – is frantically being played by one or two long-haired loons in black leather jackets, tight jeans and white high tops. It’s as if KK’s Steel Mill has been built on the burial site of 80s thrash and Annihilator’s rapid racket has released the beast from its primal pit.

“Right, that’s the warm up,” says Waters. And with ‘King of the Kill’, Annihilator proceed to, well, annihilate the place, the crowd joining in for the ‘Kill’ and pushing the energy levels even higher. ‘No Way Out’ blasts past and slams us into the darkened drones of ‘Set The World on Fire’ that throws us into the blazing ‘Ultarparanoia’. The instrumental intro of ‘The Trend’ brings a lighter shade to the evening, albeit a brief one before the ridiculously rapid ‘Schizos (Are Never Alone) Parts I & II’ is thrust upon us. After such a beating, what better than a drum solo as respite? But Fabio Alessandrini, with the band since 2016, isn’t about to let up, seizing the audience with a monstrous exhibition of all things thrashy bashy beaty and tricky ticky timebomb in an oustanding drum solo.

While the quirkily humorous ‘Knight Jumps Queen’ gets a few titters and the manic ‘Twisted Lobotomy’ ramps up the thrash, Mr Waters is about to reveal a side of himself that I suspect no one thought existed. Like most Canadians, Jeff Waters is polite, courteous and humble, especially with his fans. He’s the kind of guy that you would expect to wish everyone well – without exception. But it appears that ain’t so. Introducing new track ‘Psych Ward’ from new album, Ballistic, Sadistic, coming in January 2020 – oh yes! – as “my first ‘Fuck you! Die!’ song I’ve ever written,” it looks like Jeff has finally broke.

With ‘Tricks and Traps’ and ‘Phantasmagoria’ to close out the main set and leaving us definitely wanting more, they soon return for their much-deserved encore. They have to. They haven’t played ‘Alison Hell’ yet. And so, it’s to their 1989 debut, Alice In Hell, that the band return for the last four songs of the evening. Between ‘Burns Like a Buzzsaw Blade’ and the classic ‘W.T.Y.D.’, Waters takes a moment to share a tale or two about Randy Rampage, the vocalist on Alice In Hell and 1999’s Criteria For A Black Widow who passed away just over a year ago. Then we get the instrumental ‘Crystal Ann’ before, finally, ‘Alison Hell’ closes the evening out to huge cheers and applause.

With a line-up that’s seen more changes than Spinal Tap – and  a lot less dusting for vomit or spontaneous combustion – with Aaron Homma on guitar and backing vocals, co-producer of 2017’s For The Demented Rich Hinks on bass, and the aforementioned Fabio Alessandrini on drums, Waters has three excellent musicians with him right now. Witnessing them on stage and seeing how tight, focussed, energetic and intense they are, given how good Annihilator’s last five albums have been, and how good ‘Psych Ward’ and ‘I Am Warfare’ (video above) are, new album Ballistic, Sadistic is going to be something special. And if Jeff and co. want to come back to Wolves in support of it, there’ll be more than a few people waiting. 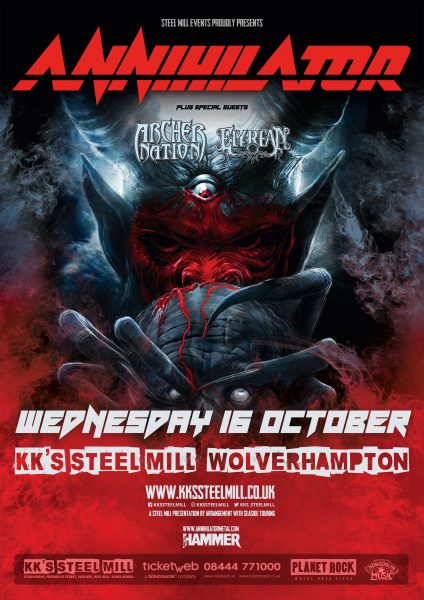