They of the ambigrammatic band logo.

Angel‘s history is a lot like most bands. Early struggle. Members come and go. Hard work. Attention. Success, kind of, but no real breakthrough, despite producing a pretty credible body of work.

You have to say that describing yourselves as “not like Kiss” was hardly a winning strapline, But they were unquestionably a band who had everything except luck. Ultimately they were great at being the sum total of their contemporaries, without really carving out their own unique identity.

Before exploring White Hot (1978) it’s worth mentioning David McMacken’s striking cover art. A commission he had to create in a matter of weeks turned out to be one of rock’n’roll’s more enduring and most admired pieces, arguably a carry over from Sixties’ Pop Art’s more primitive approaches. The album was to be titled Red Hot but was changed once McMacken’s masterpiece was unveiled.

It was the band’s fourth, and they really hadn’t broken through with their first three. What to do? What they do best, put together an album of pounding commercial pop rock, produced and directed with exemplary flair, and polished to a shine by Eddie (Legs Diamond/Karen Lawrence) Leonetti.

The opening four tracks are the album. From the rich, pulsing Boston-esque pop of ‘Don’t Leave Me Lonely’ and the streetsmart, teenage angst of ‘Aint Gonna Eat My Heart Out Anymore’, to ‘Hold Me Squeeze Me’ and ‘Over And Over’, both fuelled by a ferocious rhythm section, propelling them vigorously in the direction of Free and Van Halen.

Despite ‘Aint Gonna…’ becoming a minor Billboard hit, White Hot never gained the necessary traction to take it over the line.

Rock Candy’s pinsharp remaster contains two (rare) bonus tracks: ‘Better Days’, the B side from the ‘Winter Song’ single release, and ‘The Christmas Song’, a special version of ‘The Winter Song’, released as single to capitalise on the seasonal market.

The following year, they recorded and released their fifth album, Sinful. 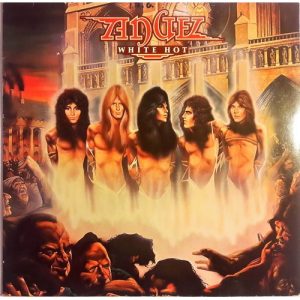