Anyone fond of cheery tunes with sing-a-long choruses please skip to another review now. This one ain’t for you pal! If a foundation mixed with elements of doom and dissonant drone effects bring something approaching a smile to your face, read on my friend. Angakok are a Belgian trio and this is their debut release. An interesting affair it is too.

The first song – although of course it is actually anything but – is ‘Perpaluktok Aitut’. It begins with some fuzzy ramblings in a foreign tongue not entirely dissimilar from the kind of obscure channel you may occasionally have stumbled across in bygone days when twiddling the ‘tune’ knob of what was once lovingly referred to as ‘the wireless’. This eventually drifts into the distance to be replaced by a sonic drone that burrows into your skull supported by waves of dark distortion.

Having locked you into its pen of purgatory, the soundscape shifts into the second track ‘Sacrifice’ a pearler, opening with methodical percussion and a grating riff. And now the vocals join in with a sinew stretching cry wailing as though on a lost lament as the crescendo building around starts to evolve, kick open doors and eventually bring a semblance of shape to the movement. Mid-song there’s a 90-degree tempo change with cymbals crashing , drums savaged with the whining wail becoming more of a manic bark.

The overdub of disjointed voices babbling away returns on ‘Collapsing’ nestling uncomfortably on top of a sharpened riff, and restless percussion, the whole sound painting a suitably bleak picture with few, if any, glimpses of light. The tortured and twisted content is notched up on ‘Aksarpok’ a steady uncomfortable drone deadening your senses as the coldness envelopes further offering nothing to hang on to by means of escape.

The most interesting track is by far the longest, ‘Samsara’ clocking up around 12 minutes. It’s initially a complete contrast on the first four tracks, a pacey tom pounding machinegun providing a stark contrast to the funeral path already travelled down. The vocals are just as prehistoric although the accompanying riff does deliver a few more peaks and troughs rather than the spirit level drone of despair. Interestingly the following two numbers – one a flattened line of brain-cell-eating drone – only last a minute or so. The snappier ‘Dead Birds’ is a raw treat, albeit a very brief one.

Angakok are drawn to the doom like moths to a light and they return to their spiritual home on ‘Trust My Scorn’ which slowly releases steady rhythms into the ether flanked by a punishingly purposeful percussion and of course more strained hoarse cries. The doom descends with biblical proportions from the Liege trio on ‘Empty Cup’ the sluggish opening blows landing like weighty cannonballs, opening up giant craters for the following savagery to descend into. The drummer could nip to the loo and back so infrequent are his bludgeoning blows but when they land they do so with conviction and once the reins are released on the riff the evil sludge and slime is free to smother everything in its path.

Making music of essentially minimalist misery is never going to bring home the bacon financially. Angakok’s hostile landscape is a place few would choose to venture. But the musical back alleys are where it’s necessary to venture if you’re after something thought-provoking, challenging and confrontational. Angakok’s release ticks all three boxes. 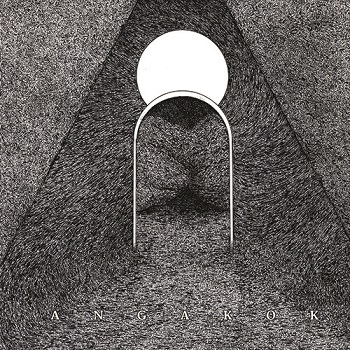