An indie-rock powerhouse, Andy Bennett has had an illustrious career working with the likes of Ocean Colour Scene, Liam Gallagher, and Roy Wood. As a singer songwriter Bennet is a versatile artist with influences ranging from Robert Plant to The Beatles. Some of the most influential artists in Bennett’s career have been Led Zeppelin, Neil Young, Crosby Still and Nash, ELO, Jackson Brown, Pearl Jam, and Eric Clapton.

A talented musician, Andy is multi-skilled playing acoustic guitar, electric guitar, bass and drums. He is also recognised for his songwriting style once described as “musical and lyrical poetry” (Flick of the Finger 2016)

With his roots evolving from a career with the world-renowned Ocean Colour Scene, Andy has big plans for the future with his already-successful solo career. 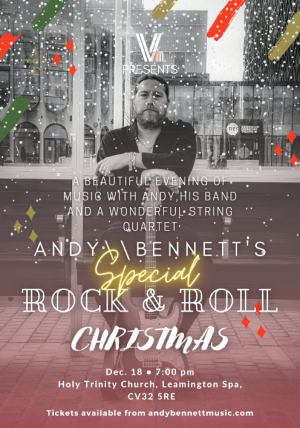 While Bennett’s career started much earlier as a guitarist for Ocean Colour Scene, playing as their live guitarist and recording tracks for studio albums. He was also keen to make his own mark on the music industry.

Bennett’s first foray into band life started when he formed the band The Elements (previously known as Sargent) Signed to the label Acid Jazz, The Elements quickly found fame with their brand of anthemic, mod-revival-esque rock. Their single ‘Caught in the Rain’ charted at number 7 in the indie charts, and they supported Ocean Colour Scene on their biggest arena tour in 1998.

Throughout his time with Ocean Colour Scene, Andy brought his own style and influence contributing to the band’s growth and evolution. Most notably with his track ‘Old Pair of Jeans’ on the ‘Saturday’ album and through his guitar performances during live shows and tours.

‘Old Pair of Jeans’ was well received by critics with The Digital Fix saying “It just gets better with every song a winner. The jaunty ‘Old Pair of Jeans’ is rollicking fun: “I wish you didn’t get hung up so easily / When you’re bound fall apart you always fall apart at the seams / So worn and so torn. Like an old pair of jeans.”

· A Hyperactive Workout for the Flying Squad (2005) (Guitar)

In 2015, Andy made the decision to leave Ocean Colour Scene and focus on his solo career. His first single ‘Hole in the Road’ was championed by both local and national radio stations, including BBC 6 music. This was closely followed by his second single ‘Drift Away’ which again attracted great reviews and airtime on both BBC Radio 2 and BBC 6 music.

In November 2016 Andy released his first solo album Thinkin’ Drinkin’ Singin’. Engineered by Austen Kilburn, the album was a ten-song collection drawing inspiration from The Beatles, with elements of Ocean Colour Scene, Paul Weller and Andy’s own unique style running throughout. The album was given a 4-star rating out of five review from Planet Mosh, and five stars from Flick of the Finger.

Andy’s most recent single ‘Do it all for love’ was released in 2019 garnering plays on national radio stations.

Following the success of his first album, Andy has been working on his much-anticipated second solo album. The second album is complete and due for release in early 2022.

For more information on Andy Bennett, please visit the links below: