I found out about this gig in the same week as this year’s Download, where what might have been an epic performance by Anathema seemed to be undone by a highly questionable onstage sound, and when it was followed shortly afterwards by the band’s latest and masterful album, Distant Satellites, I often found myself counting the days to the gig. Pleasingly, the Slade Rooms were rammed for the gig, and there was a fair amount of anticipation in the air when the houselights dimmed and the intro tape rolled.

You know you’re at a Progressive Rock gig when the show begins with the band playing sections of two different multi-part songs, but when the songs in question are ‘Untouchable’ and ‘The Lost Song’ it really doesn’t matter how many parts they have. Both start in typical Anathema fashion, with a simple guitar or keyboard figure, then the band gradually adding layers of instruments and vocals, often without the listener realising it’s happening, until the song builds to a triumphant conclusion. As on the album, ‘The Lost Song’ didn’t have its third and final part played immediately after the first two, but placed later in the set. In this case, one of the songs interspersed was the magnificent ‘Thin Air’, which drew a big cheer of recognition from the crowd and despite the excellence of what had gone before, elevated the gig to another level. 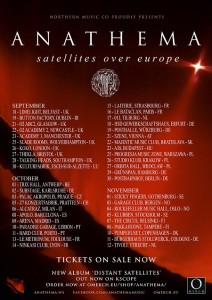 Anathema’s music is often so layered and densely textured that producing a good, clear live sound must be a very taxing job, and the low ceiling in the Slade Rooms, while adding a lot to an intimate atmosphere, can’t help the sound engineers much. Nevertheless, apart from a slightly muddy beginning, the sound for this gig was pretty good, although at times the vocals could have been a little higher in the mix. I really couldn’t understand the isolated punters who kept shouting for the band to ‘turn it up’, and that it was too quiet. A wall of noise is the last thing you want for this type of music, and being able to pick out each of the musicians properly and listen to the voices clearly was something worth savouring, particularly in a piece like ‘The Lost Song Part Three’, where the vocals were so clear and pure, it just held the listener spellbound.

Playing wise, the band were absolutely on fire; the guitars of Danny and Vince Cavanagh weaving the patterns underneath some superb singing by Vince and Lee Douglas, who must be one of the most underrated singers around. Behind them the three part rhythm section of Jamie Cavanagh on bass and drummers John Douglas and Daniel Cardoso literally never missed a beat, despite some of the band’s newer material, like ‘Anathema’ the song, using some very ambitious time signatures. Daniel Cardoso had been brought into the line up specifically so that the band could write and play more rhythmically ambitious music, but later in the set, beginning with ‘Storm Before The Calm’, when Cardoso moved onto keyboards, and John Douglas took over the main drumming role, the high level of performance never wavered. If I did have a criticism, it was that Lee Douglas left the stage for a large part of the second half of the set, despite her being officially elevated to being a full member of the band. There’s nothing at all wrong with the vocals of Danny and Vince, but Lee really does bring an extra dimension to the band’s music.

The main set, a too-short 75 minutes that passed by far too quickly, ended with an absolutely epic ‘Closer’, that had the Slade Rooms singing and clapping in a most un-Prog like manner, and the song ended in climactic fashion with Danny banging out power chords as the band reached full power behind him, but if the main set had verged on the short side, the encore was exactly the opposite, four songs that added over another half an hour to the show, including the title track from the new album, Danny Cavanagh channelling Jimmy Page with some neat violin-bow-on-electric-guitar work, that added even more new textures to the song.

Earlier this year, almost as soon as my first listening had ended, I installed Distant Satellites as my ‘Best Album of 2014’ favourite, and I haven’t heard a lot since to challenge it. Hearing the songs live, with the atmosphere of the Slade Rooms and an audience that played its part in making a memorable show, made this a gig that was as good as anything you will hear this year.