The last time I saw Primus was in 1998 at the Shepherd’s Bush Empire, a gig so great that because I couldn’t drag myself away until I heard the last note to be slapped out of Claypool’s gorgeous Carl Thompson bass, I missed my coach home and ended up sleeping rough in our nation’s capital. Fortunately for me, such transport issues are of little concern this eve as Les, Ler and Tim – making a much welcome return to the band – have come to Brum and so, as far as I’m concerned, they can play as long as they like.

Dedicated to material spanning their discography from 1990’s Frizzle Fry to 2011’s Green Naugahyde, ‘Those Damned Blue-Collar Tweekers’ and ‘The Last Salmon Man’ kick off the first hour. Immediately, the crowd are into it. Every word is sung, every head is bopping, and a few bodies are flying. With a warning to the only girl in the front row that the next song usually results in vast amounts of sweaty, testosterone-charged men crowd surfing, ‘Wynona’s Big Brown Beaver’ has the whole room chortling along. After ‘Groundhog Day’ gets an airing, Les introduces Ler’s “fangers” for ‘Over The Falls’ and with ‘My Name Is Mud’ and ‘Jerry Was A Race Car Driver’ getting the biggest response, Primus have the crowd in their palms. 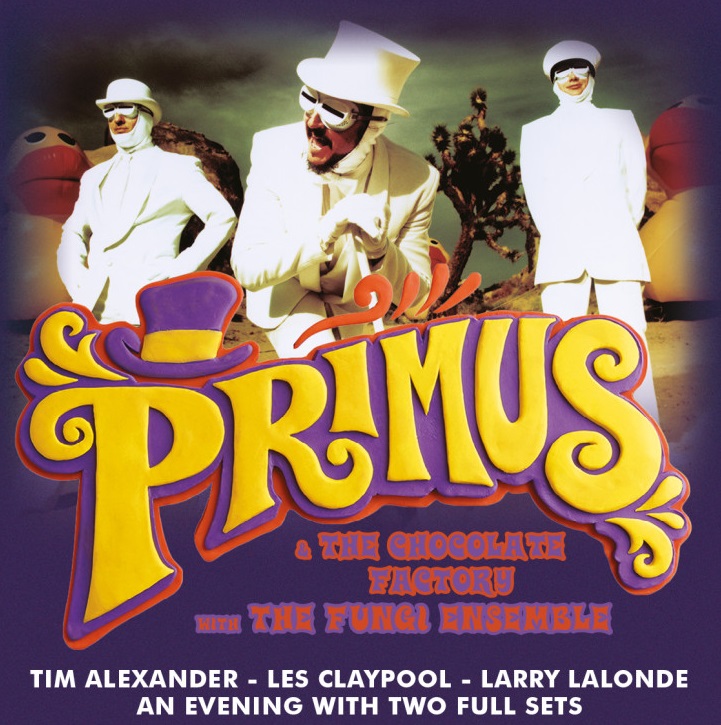 After a 35-minute(!) interval, the curtains part and an incredible stage set is revealed. Two massive mushrooms flank the stage, a huge screen sits behind the band, and Tim Alexander is now perched between a masked cellist and a marimba player. From here on in, we are guests at the Chocolate Factory, Primus bestowing upon us a veritable feast of twisted visuals from 1971’s Willy Wonka & The Chocolate Factory as they play through their version of the soundtrack. Well, I say “their version” but there’s very little of Primus in it and all this eye candy and the occasional presence of two massive-headed dancing Oompa Loompas does nothing to compensate for a frankly dull 45-or-so minutes.

The album’s a flat and dreary piece of work, more caca than cocoa. Maybe a livelier version – i.e. a Primus version – of the ‘Oompa Loompa’ tracks would have been a bit of fun to drop into their set but why they chose to cover the soundtrack in full is beyond me. Playing the album perpetually prompts the question, “where’s Primus?” Tim Alexander, a phenomenal drummer, is wasted on this project. An innovative guitarist that always manages to find space between the heavy drum and bass lines, Ler’s playing is toned down and restrained. And Les, bassist extraordinaire and Kermit-like vocalist, thumps along like an elephant with a limp. Live, the album does nothing except drag the evening almost to a halt.

The crowd, that sweaty mass of bopping bodies that bounced its way through the first hour, is still, motionless, clapping as each track drags to a weary close. Most appear to be enjoying the show but me and a friend are counting down the ‘Oompas’ (there are four of the fuckers to get through…). Fortunately, the three-song encore picks the evening up. One of Primus’ rare political tracks, ‘Too May Puppies’ is sadly still relevant, ‘Southbound Pachyderm’ with elephants-bouncing-on-trampolines visuals is hilarious, and ‘Here Come The Bastards’ with the footage of the Oompa Loompa’s walking around Birmingham city centre gets a massive cheer. If they’d played ‘Tommy The Cat’, ‘John The Fisherman’ or maybe even ‘Spegetti Western’ or ‘DMV’, it would have gone some way in making up for that bit in the middle…