A hugely respectful nod to the genre’s roots…

For a while it looked like Norwegian band, Wigwam were genuine Melodic Rock contenders, but at the end it was clear that the band’s energies were spent – last album, 2012’s Wall Street – saw them running down to empty as they coasted toward an inevitable breakup. Now, vocalist Age Sten Nilson (the artist formerly known as ‘Glam’) has formed a new band and, very astutely, has teamed up with Erik (Eclipse/WET) Martensson to create the band’s debut album, Shanghaied.

To anyone who is remotely interested, it’s clear that many, many bands, old and new, just don’t have the ability or imagination to break away from that spider’s web of overly familiar tropes at the centre of the AOR genre. It’s been exhaustively explored and comprehensively mapped. Only a select few can stretch it into shapes that seem spontaneous and fresh. Erik Martensson is one of that gifted minority. This talented writer/producer/guitarist has sprinkled liberal helpings of magic dust over relatively recent albums by Bobby (Toto) Kimball, Jimi (Survivor) Jamison, Dalton, Brazen Abbott and of course his own bands, WET and Eclipse.

Working together, he and Nilsen have cleverly married the latter’s Glam Rock tendencies to a steely melodic rock sound, full of furious energy and ebullient invention, and while it’s true that they stack up influences ranging from Whitesnake (Road To Babylon) to Van Halen (Give Me A Sign), with Guns’n’Roses skittering about the studio, looking for a place to settle, they are clearly in avid pursuit of their own celebratory sound.

Martensson explores the nooks and crannies of the genre yet never sounds obscure or esoteric. He is blessed with the kind of producing and arranging style that constantly surprises yet always emphatically reaffirms the urgent, declamatory nature of the genre. That, and a laser like focus on melody and, indeed, pumped up dynamics, succeed in stamping the music with a mostly conventional AOR logo.

‘Tie Me Down’ and ‘Wild Kard’ are the big hitters, showering sparks from metallised riffs and vertiginous choruses. Both tracks deftly evade cliché by deploying flourishes of radiant chord shifts, and by peppering each track with a ballistic spray of explosive lead axework. At at other times they surrender to the shouty, singalong simplicity of songs like ‘Do You Like It’ and ‘Hit Me With Your Bomb’, respectively a gaudy, eurovision-esque stomp; and a charmingly clumsy clump through Bon Jovi territory. Nilsen’s voice is fuller and more controlled now, tempering the more passionate urges of the alpha male – as on ‘Another Piece Of Me’ – with upbeat lyrics… even if here, and elsewhere, they too often descend into cartoon sex and disappointing repetition.

As all good melodic rock albums should, Shanghaied goes out on a high. ‘Heart’s Not In It’ is a big, all guns blazing production number, filled with unashamed sentimentality. It is a hugely respectful nod to the genre’s roots that’ll warm the cockles of your, er… heart. 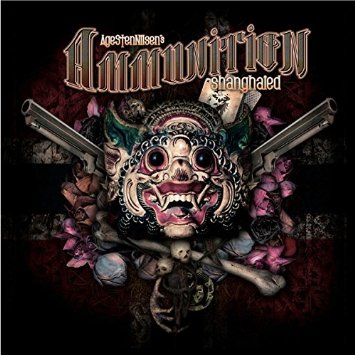