This is gut-wrenching stuff. Literally. Amenra actually put their hands inside of you and pull the heart from your chest. It’s brutal, visceral and bloody. Distress levels soar up to the very treetops of emotion and the four full songs featured on this album, shoehorned into 41 excruciating minutes, will test both your emotional and physical capabilities to the very core.

Tear ducts can of course be coerced into action by the likes of Arkansas angst purveyors Pallbearer, for example, but Amenra’s doom diatribe is more base, more raw and altogether of a more frightening and savage dimension. Certainly on the incredible opener, ‘Children of the Eye,’ Amenra exhibit the full unbridled force of their undisputed talents with Colin H. Van Eeckhout’s jugular-bursting cries appearing so exposed and vulnerable as to almost make it seem as though to listen in is to intrude on personal grief. It’s almost easier to move into the next room although such is the ear-shattering velocity and venom of Van Eeckhout’s immense vocal power that the next house would properly be necessary to truly distance yourself from this emotive explosion.

Amenra have been around for 18 years, this is their sixth album, all of which come prefixed by ‘Mass’ and then the number. So Mass VI is their sixth offering and probably as exhaustive and demanding as any to have previously passed through their hands. It’s also the Belgians’ second album via Neurot Recordings, following on from the powerful 2013 release Mass V.

van Eeckhout formed Amenra with guitarist Mathieu J. Vandekerckhove in his home town of Kortrijk and drummer Bjorn J. Lebon has also been ever present during the near two decades the band have existed. The line-up also features members of notable Belgian acts Oathbreaker and Wiegedood. This album was recorded in the Belgian Ardennes region, well known for its dense woodland. Such was the snowfall in the south-east of the country at the time, that the band members were effectively kept hostage there for a week or so. In many ways their resulting work on Mass VI carries something of that captive intensity, almost as though every door is closed to them with nowhere left to turn. 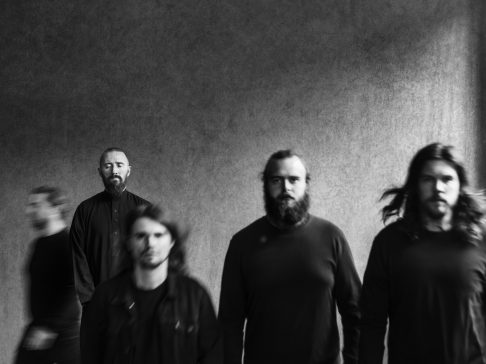 The second track is the depressive ‘Diaken,’ the album’s longest composition at around 11 minutes and one which reveals the full repertoire of Amenra’s armoury. A calming rhythmic groove leads the way into a track which ultimately opens up into feral fury that somehow then dissolves into warm velvet grooves reassuring enough to send even the most restless baby to sleep. The strands are somehow interlocked in all the right places, to create one sprawling shroud that stretches into all the recesses of you soul.

There are two very brief interludes on the album, the first of which is the spoken word in Flemish that is ‘Edelkroone,’ which fades into more wailing  on the humongous bewildering monstrosity ‘Plus Pres De Toi’. Colossal waves land like industrial machinery before the slower strokes take over, van Eeckhout adapting his vocal tone and depth to meet the demands of each contrasting sound. The final couple of minutes takes the pain to biblical levels. It’s brutal, the carnage almost leaving you checking your own hands for bloodied wounds. Despite the near unbearable grief that permeates almost every step Amenra take, moments of blinding beauty help create an extraordinarily ethereal juxtaposition on a song such as the imperious ‘A Solitary Reign,’ enhanced by passages of clean singing.

The band have gone through a number of crumbling personal experiences since their last release, among them the death of family members and an infant who required intrusive cranium surgery. These experiences have heaped sorrow upon the collective members, who were also blessed by happier news as well, and the result is Mass VI an album of appalling desperation and bleakness and yet within which an inherent cry of hope is sustained.

With darkness light will eventually penetrate and life will always follow death. It is these emotions, and the circle of life, that is captured sublimely by the Belgians on what is little short of a masterpiece. They are on tour in the UK soon but be warned. As though the music isn’t painful enough, van Eeckhout has a penchant for attaching tent-hooks to his own skin through which fist-sized boulders are hung to create a disturbing and bloodied appearance to accompany the equally graphic aural agonies.