With an album to launch, Alunah were very much centre stage at Scruffys on an evening when stoner and doom were to the fore, with one interesting curveball thrown into the mix.

An energetic evening with four acts squeezed onto the bill was opened in great style by The Order of Israfel. These Swedes have generated plenty of interest since forming only around two years ago. Much of that can be attributed to frontman Tom Sutton, whose previous best work was as guitarist with Japanese doom outfit Church of Misery. Tatsu was the frontman and songwriter with the COM but in The Order, Tom has been able to assert his own style and really leave his DNA on the soundtrack

Delivering an energetic set largely consisting of some catchingly creative sounds from their outstanding debut album Wisdom, it’s clear that all the talk of this likeable bunch has been fully justified. Opening with the sweeping opening track from the aforementioned album, The Order of Israfel were quickly into their stride, with some soaring riffs and Tom’s wonderfully enthusiastic delivery.

Although fitting somewhere into the current day prog scene with lashes of Sabbath skirting the edges, The Order of Israfel have more strings to their bow than a concert cellist with tracks like ‘The Noctuus’ a real rollercoaster of a number travelling down some dark and spooky alleyways. As the songs typically stretch to around 10 minutes we had to make do with just the three numbers and the final offering, Morning Sun (Satanas), was another punchy ode to Lucifer.

The Order of Israfel could hardly have got the evening off to a better start and they certainly have the ability to pick up the flag buried by the likes of Candlemass and Cathedral and take it on the next part of its journey towards the flaming gates of hell.

One act who did not fit quite so neatly into the billing was Nat Bite who was probably a puzzle to most punters surveying the gig poster. In her floral dress she looked more suited to a day at the seaside than a trip down the steps into Scruffys lair. The one-time Birmingham Conservatoire student proceeded to give a considered and warm rendition of several songs of her own creation, accompanied only by herself on a mixture of keyboard and guitar.

Apparently some narrow minded types had aired their disapproval of her presence on a doom/stoner bill but fortunately those who actually gathered for the gig could scarcely have been more welcoming, near silent during the songs followed by polite applause after each number.

Not for the first time a metal crowd showed they’re not quite as tunnel-visioned as some others may have us believe. Nat also played piano on the solo album of Jeff Walker (Carcass) so that credential alone should win her more than a few brownie points among the metal fraternity. Not sure if we’ll see Nat in this environment again but good luck to her in the future.

Something approaching normal business resumed when Lonely Kamel humped their gear onto the stage. Naming your latest album Shit City probably sends out the wrong signals as the album is in fact a blast of downtuned southern stoner sounds.

Lonely Kamel are from Oslo but their vibrant turbo-charged take on the stoner scene is a world removed from the church burning histrionics of some of their countrymen’s black metal roots. There’s nothing moody or morose about this hirsute bunch of rednecks. It’s pure riff heaven with absolutely scorching numbers such as ‘White Lines’ which I somehow doubt is about the markings around a football pitch. Taking it back to the fuzzed up guitars of the 70s in a way matched by their Scandinavian cousins Graveyard, Lonely Kamel are an easy band to warm to and in Thomas Brenna have a frontman with a great hearty delivery.

The darkest and heaviest band of the night were of course local headliners Alunah who had plenty of friends and family in the house for this showcase album launch show. 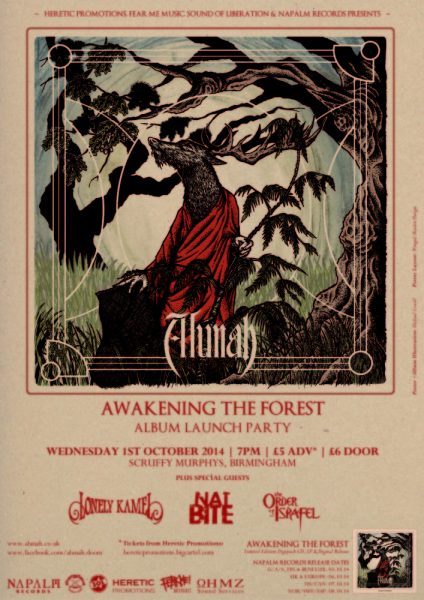 New release Awakening the Forest is their third album, and first on Napalm Records, and they’ve certainly justified their recent deal with this endearingly haunting piece of work. Two tracks from the new album started the set, the manically deep ‘Heavy Bough’ and ‘Bricket Wood Coven’.

The intro to ‘Heavy Bough’ is something approaching doom utopia with its frighteningly downtuned start sending tremors vibrating across Scruffys floor. Singer Soph Day has one of the finest female voices around – and not just in doom crop circles either. Piercingly haunting at times but always under pitch perfect control, Soph has the pleasure of performing with three equally adept musicians, newest member Dan Burchmore now firmly entrenched on bass after a year or so with the band. Dave Day coaxes all the right noises from his guitar to set the landscape for Alunah’s songs to breathe in while Jake Mason’s methodical drumming helps carve these songs into your blackened soul.

The Midlands army of Alunah fans, which I suspect is growing faster than the Selfridges queue for the Boxing Day sale, had already had a taste of ‘Bricket Wood Coven’ which the band performed live earlier in the year. It’s another monstrously heavy slab of doom with a meaty riff so tasty even a vegetarian could be forgiven for taking a bite. Soph again stretches out the dark cloak until the whole floor is under its wing, practically suffocating under the smoky signature of evil.

There was a genuine moment of surprise for Alunah regulars when the band threw in an 80s cover from The Cure. ‘A Forest’ was always one of the goth legends’ finest tunes and it was certainly done justice by Alunah who put their own spin on it. Robert Smith would surely have approved!

Alunah also threw in their old favourites ‘Belial’s Fjord’ and ‘White Hoarhound’ which never fail to melt the hardest of hearts before bringing the curtain down on a great set – and terrific night at Scruffys – with the new album’s title track ‘Awakening the Forest’, another mesmerizing masterpiece from one of the UK’s most enchanting doom bands.

Listen to our interview with Soph of Alunah here