Heavy metal fans take one step back and admire Mike Penn’s steampunk cover from a safe distance. Accept the similarity of name, Glaswegian home base, and that there’s a female singer involved; then try and stop the words “Happy Birthday” resounding in your head, Altered Sky are more akin to the likes of Paramour with some serious party pop added. No bad thing, especially since Ana Nowosielska has a sweet clearly toned voice, a fetching line in melody, and a canny ear for lyrics.

“You’re too late”, she relates of a soured relationship, “I’ve got a home-grown heart and I’m ready to let it go.” All sung in upbeat manner over a crisp chorded stirring bouncy rocker, with hook line and sinker harmony vocals going on during opening number ‘Where I Belong’.  The video to it is a playful fairy story on the cheap: I suggest Altered Sky ignore the club circuit and book themselves gigs at anime or comic conventions; there’s one in Paris that eats up this kind of thing.

‘Traitor In Me’ is similarly paced, with deeper fiddling riffs and rushing chords from guitarists Neil Ramsay and Richard Passe adding a sense of melodrama as Nowosielska delivers hiccupy throated verses then wails out on the choruses while Amy Blair’s drumming echoes the old Tony Basil hit ‘Hey Mickey’. A headshaking rave-up in under 3 minutes.

With a more American mainstream rock opening, ‘Decay’ is propelled by Ross Archibald’s bass, features the briefest of guitar solos and while the repeated line “Sugar never makes the sweetness better” is sung euphorically, when followed by the quieter “Tell her!”, there’s a sting in the tail revealed. ‘Live For It’ is the longest track on the EP, slightly more experimental in sound, pace and rhythm, but not treading too far.

Over a whole album, further diversity might be required far and there would be potential for mainstream appeal. As it stands, Stop And Live is a very good EP featuring well-crafted songs delivered with enthusiastic energy. 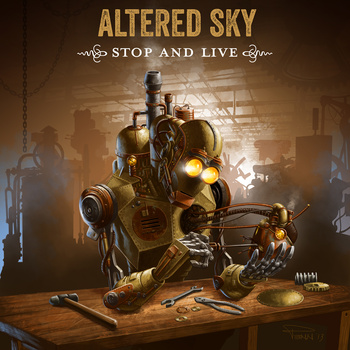