We are now into about two decades where every other new rock band looking for a gig describe themselves as sounding like Alter Bridge and Black Stone Cherry, not that either of those two sounded alike. Seventh album in, the former members of Creed alongside Myles Kennedy continue to deliver their patented heavy-duty sound of earnest songs wherein we yet feel we can pluck victory from defeat. Alter Bridge always came on mean and moody but the truth is they were into mental wellbeing well before it became a bandwagon.

As a band there’s little doubt their fanbase will ensure healthy records sales for Pawns & Kings, albeit proportionally more so here than their homeland. Topical subject matters (if we can encompass all that’s ensued since Covid) abound, though allegory and metaphor are our watchwords rather than literal conceits. Musically the band’s sound remains all-pervasive, but it’s stretched out since last I was listening more intently to their records, embryologically so; it’s progressive in both an epic and genre-like manner. Big songs then, for a world that gets that little bit smaller every day.

As from day one, the band remains Myles Kennedy on vocals/guitars, Mark Tremonti on guitars/vocals, Brian Marshall on bass and Scott Phillips on drums, with long-time producer Michael Baskette still at the helm. Thus, with ‘This Is War’ they commence battle – imagine Queen’s ‘Lap Of The Gods’ as template for a soundtrack remake for Apocalypse Now, with a little bit of that ‘Stargazer’ power metal fantasy that’s been with us since Rainbow Rising. Got it in your head? Right, add some prime beef to weight the riffs and picture The Royal Ballet tapping their way through Tremonti’s sabre dancing solos.

Phillips pounds and pushes unrelentingly, while the thickest of guitar bends ricochet between slow thrusting broken chords on ‘Dead Among The Living’ while ‘Silver Tongue’ goes from turbo charge riffage to knuckle-duster-worn seismic movement changes, Kennedy letting rip, with more Queen like harmonies underneath as he cries out: You’re over the line, under the gun, I am the reason for what you’ve done
Tooth of a crime you can’t outrun, Under the spell of my silver tongue!” Elsewhere in this song, and some of the others too, I can’t shake free from thinking whipped-up fantasy Dio/early Queen lyrics are being liberally applied as metaphors I need more time to decipher, beyond angst and fury.

Thus stated, ‘Sin After Sin’ can’t help but remind me of early Judas Priest, not least Kennedy reciting the title as Halford does within ‘Victim of Changes’, mind you there’s a secondary voice (Temonti?) that does a good impression of our Ozzy when he was younger. Beyond that musically it’s a heavy psychedelic blast of sound that crushes progressively. Tremonti does take lead vocals on ‘Stay’ and it’s catchy as hell with big flag-waving, bic-lighter burning moments that someone might dare to call AOR were it not for its pounding rhythm. Melody and brutal metal continue to scheme under the bedclothes in the dark punning verses of ‘Holiday’ with lines like, “I compromised to the whims of men who promised a change, but in the end they left me high and dry.”

‘Fable Of The Silent Son’ proves something of an epic, running to over eight minutes, with distinct musical themes coming to pass, wherein Kennedy might be singing lyrics from some lost Gnostic book that merges Homeric epic and Milton’s Paradise Lost – there are also some particularly good, loud and leary guitars going ten to the dozen around the six minute mark.

‘Season Of Promise’ could be a tattoo-touting farmer’s words of wisdom, as much as a world prayer of self-belief that the madness of our current crop of international politicians will also soon pass and we’ll be able to move onto better things. You will literally want to shake your ass on listening to its bludgeoning hypnotic snake-writhing riffs – so, if you’ve a big fat builder’s backside with, you can’t say you’ve not been warned.

‘Last Man Standing’ rides in majestically, guitars weave in and around, chiming, dancing, resonating, less pounding but another epic sounding number; one fit for some old Cecille B. DeMille biblical powerhouse remake beyond your Game Of Thrones wannabes. With one minute to its conclusion the guitars get particularly gnarly.

Concluding with title track ‘Pawns & Kings’ it’s another epic pulling in at over six minutes. Kennedy narrates this one well, in character, a double tracked voice acting as chorus, and his singing exemplary in its execution and emotional outpouring. As throughout this album, the four musicians take us on a journey of vary paced stirring force with majesty and melody that is progressive in nature, heavy in approach and by act of duty genre. Seriously, two decades down the road, are new bands really still saying they sound like Alter Bridge?

Alter Bridge may still retain all the ingredients they had when they first formed, but they’re not the same band. Better or different? A little of both. There are some powerful, and at times unusual, tracks on Pawns & Kings and that’s for sure. 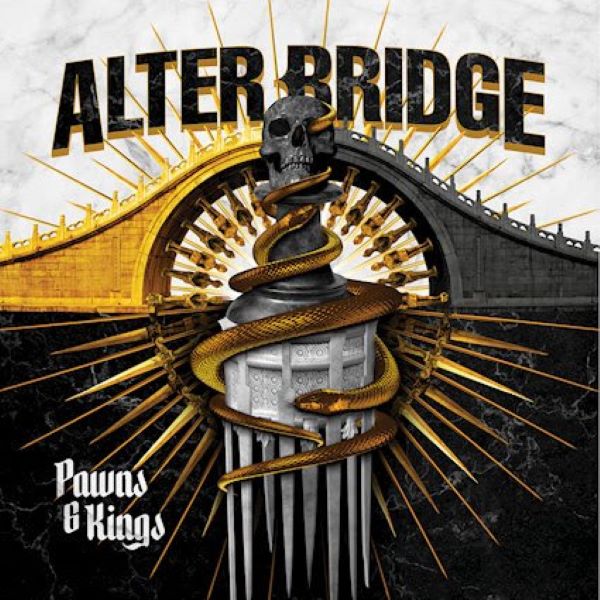