So here we are. Whether you were there or not, if you’re an Alter Bridge fan you’ve probably been waiting for this with baited breath. A lavish 3CD live document of their “landmark”, “momentous” 2 night stand at London’s cavernous O2 arena. This, of course, follows on from 2011’s live CD/DVD of their “momentous”, “historic” performance at London’s cavernous Wembley Arena and 2008’s “triumphant”, “famous” Amsterdam show.

But then, Alter Bridge are that kind of band. Every song is “epic”, every album “groundbreaking”, every concert is a monumental, once-in-a-lifetime event – record sales recorded in millions, ecstatic audiences counted in tens of thousands. Every waking moment apparently is vital, massive, orgasmic…it must be exhausting. But then, this is one of the few bands who can back up the rhetoric. They have the songs, the talent, the presence and, with Myles Kennedy and Mark Tremonti, one of the best singer/guitarist frontlines in modern rock. Hell, in rock full stop. To anyone who bemoans the fact that we have no next generation of Download headliners…look no further.

And so to the concert. With little or no introduction we’re off, the band tearing into new track, ‘The Writing On The Wall’. It’s instantly apparent that they’re firing on all cylinders, playing with the edge and hunger of newbies with something to prove. There’s no warming up or easing into things, they rip into song after song in a thrilling display of murderously heavy arena rock. You can hear how much they are relishing this moment, Tremonti and Kennedy locking in with the rhythm section with clinical efficiency. The crowd also sound immense and suitably pumped. It’s the sound of an adrenaline rush caught on tape.

There’s very little respite – there’s the brief acoustic interlude of ‘Watch Over You’, with its echoes of Zeps acoustic mini sets and ‘Open Your Eyes’, which is the closest we come to a power ballad. But, on the whole, very few concessions (or fucks) are given to arena style showbiz slickness. Riff follows solo follows riff, their sound in no way airbrushed for arena consumption. The G-force of each intro pushes you back into your seat. The sound is genuinely colossal, indeed, the final note of ‘Ties That Bind’ reverberates around the hall. ‘Cry Of Achilles’ cyclones of guitar, already heavy on ‘Fortress’, come into their own live.

‘Blackbird’, when it finally arrives, is worth the price of admission on its own. They lead into it with a strummed intro to the Beatles ‘Blackbird’ (see what they did there?) and milk it for all it’s worth. It distils and crystallises the essence of the band and highlights perfectly the differing guitar techniques of the frontmen – Kennedys tutored, classical class handing over to Tremontis emotional, gut level pyrotechnics – one of THE great guitar moments and about as close to perfection as a millennial rock band has got. And before you know it, it’s over, the band moving on to the next enormodome, the next groundbreakingly monumental gig.

And the extras? Two fairly superfluous bonus live tracks from the Manchester Arena and a full extra disc of  rarities and b-sides from all of their recorded albums. It’s a fascinating listen. There’s no filler here, each and every song is strong and would happily sit on their respective albums. They seem incapable of writing a duff track and there are cast offs here that other lesser bands would happily sell a major organ for. Quite why ‘Solace’ or ‘We Don’t Care At All’ didn’t make the final cut is a mystery.

Finally, an essential modern live album and a masterclass in how to do this rock ‘n roll stuff on a large scale without selling out. More focussed and intense than their 2011 Wembley document, it’s a no-brainer for anyone even slightly interested in Alter Bridge. 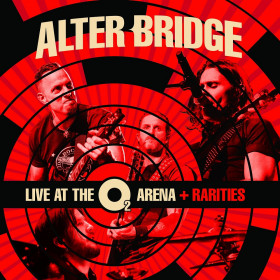