If you are looking for something fresh to listen to, try this album. It is a particularly good piece of work, a fine addition to the extensive collection of high quality production that shapes the career of American singer and lyricist Russell Allen.

He is one of the most versatile talents on the current progressive and heavy metal stage. Widely known as the lead singer and frontman of icons Symphony X and their heavy metal brother Adrenaline Mob, he is also one of the voices in the Trans Siberian Orchestra.

A particularly interesting area of his career is the collaboration with best-selling Norwegian singer Jorn Lande (four CDs issued between 2005 and 2014). Three of those joint albums included Swedish guitarist, songwriter and producer Magnus Karlsson (Primal Fear). Last week has seen the return of Allen-Karlsson partnership, this time with another vocal legend on board, Anette Olzon (ex-Nightwish, The Dark Element).

The result of this partnership is very tasteful and varied. It is intriguing to listen to, particularly when knowing what it signifies: Allen’s return to creating music after an extremely difficult and painful period of his life. As the title of Symphony X’s track goes, he has risen ‘Out of the Ashes’. The aftermath of the fatal crash he was involved in together with the rest of Adrenaline Mob in the summer of 2017 was a huge upheaval to get through. This is something he briefly mentioned on stage last June (during Symphony X’s gig in Coventry reviewed here): how lucky he was to survive and how grateful he is for all the love and support he received. Sir Russell is back from hell, which puts his new effort into perspective, as a gigantic personal achievement. He is being creative again, and just this very fact is an important milestone under his belt.

It is, therefore, not a surprise that the songs in this album are interesting in terms of lyrics, too. As in the previous releases with Lande, Allen touches on a variety of universal topics, the eternal questions of life, love, death, the fast pace of changes in the world. An underlying theme is betrayal and loyalty. As in the collaboration with Lande, the music is put in a wider context, leaning towards spirituality, with another underlying theme about guidance from above (angels). Remembering what he said on stage about all the energy and love around us, it makes you think the lyrics have come from the depth of Russell’s heart and his own life journey.

The project is an interesting piece for one more reason: to Allen’s credit, there are not many similarities with his older joint albums, which is an achievement in itself: managing to avoid the pattern of predictability which would only be natural to expect. A subtle resemblance to those albums is perhaps ‘My Enemy’ starting off in a typical Allen/Lande way, but as a heavier track. The album is kept interesting by the fact that the tracks do not fall into the same pattern and pace keeps changing.

From this perspective, the new album is one level up compared to the collaboration with Lande: those four releases were more of a selection of individual (yet perfect) pieces. In contrast, the album with Olzon has got its own logic, internal development and culmination. The opening track is very powerful with steadily strengthening pace and symphonic background after the romantic intro. With the catchy refrain (typical for Allen/Lande) and a tune taking us back to the backbone of Symphony X’s ‘Legend’, this promises good quality. There are heavier, fast paced tracks with some good riffs (‘Lost Soul’), multi layered tracks (‘Who You Really Are’), slower songs (‘Cold Inside’).

A particular pleasure to listen to is ‘No Sign Of Life’ – in a beautiful, at the same time creepy way (think Stratovarius and “Twilight Time”). The opening and closing guitar solos seal off the idea of being the last survivors on Earth in a cocoon of multi-layered guitar acts and powerful vocal duet.

The unity of two voices is particularly delightful to observe. Both brilliant in what they do, Allen and Olzon manage to demonstrate their own strengths by taking over the vocals in some songs (Allen sings solo in ‘Never Die’, ‘Who You Really Are’, ‘Lost Soul’; Olzon – in ‘I’ll Never Leave You’, ‘One More Chance’, ‘Cold Inside’). Olzon’s angelic singing gives the tracks a delightful subtlety, and the male-female duet seems to be working notably better than male-male, as it is clearer how the the two voices compliment each other. Some examples of the well found unison between them are ‘Worlds Apart’, ‘What If I Live’ and ‘My Enemy’.

As per power metal “industry standards”, you will find the usual power intros (‘I’ll Never Leave You’, ‘Who’s Gonna Stop Me Now’), some of them being less typical by blending in angelic singing (‘What If I Live’). There are also some particularly beautiful intros in songs such as ‘Worlds Apart’, ‘Never Die’, ‘No Sign Of Life’, ‘Who You Really Are’. Needless to say, there are strong guitar solos, again following the Scandinavian metal tradition (‘Never Die’, ‘Who You Really Are’).

The vocal parties are not necessarily easy (‘Who You Really Are’ being one of many examples), but both performers nail them with passion and their usual brilliance. Olzon is a breath of fresh air and a fine addition to the texture of the album. Not uncommon for European rock, lyrics don’t always match the natural curve of the melody which makes vocal work more challenging, however both singers pull this off brilliantly, managing to emphasise the strength of their singing talent.

It is so good to see Russell back, particularly with such an accomplice, and this makes us wonder, what is the next instalment going to be like? We want more! 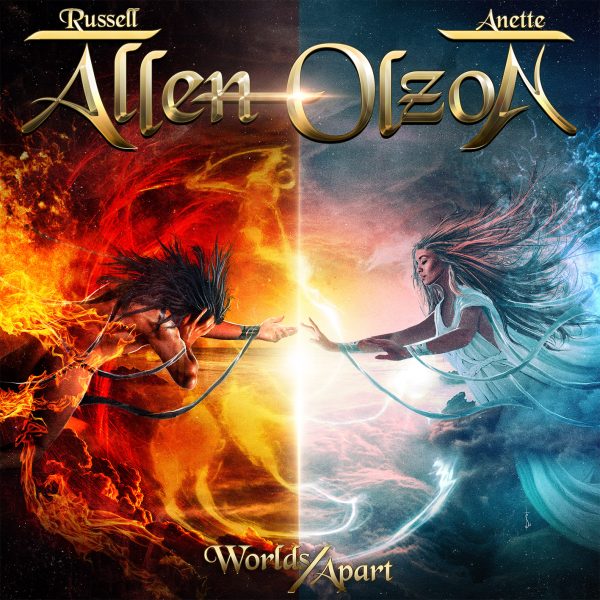