Graham Bonnet’s musical career was already over 10 years old when he hit pay dirt in 1979, when he was approached to join (ex-Deep Purple guitarist) Ritchie Blackmore’s Rainbow following the departure of the bands formative vocalist Ronnie James Dio. His time with the moody guitar maestro’s band was short lived and the line-up only produced one album (Down To Earth) so, following a solo album (Line-Up) in 1981 Bonnet was searching for a new band to front. The expression “out of the frying pan into the fire” came to mind when in 1982 he teamed up with equally volatile ex-UFO guitarist Michael Schenker for MSG’s Assault Attack album. Once again, this time following some controversy, Bonnet found himself in the queue at the musician’s job centre. However rather than repeating his previous experiences Bonnet decided to form his own band. Surrounding himself with a group of seasoned players in the form of Gary Shea on bass, Jimmy Waldo on keyboards from the band New England along with Jan Uvena (Alice Cooper) on drums (ex-Iron Maiden’s Clive Burr shortly occupied the stool) and upcoming 20 year old Swedish guitarist Yngwie Malmsteen the Skegness born frontman entered the studio to record No Parole From Rock N’ Roll with his new outfit now named Alcatrazz.

This second release in the Alcatrazz official bootleg series (the first 1983-1986 six disc set was released in 2018) sees four concerts plucked from the tour archive in support of their debut album across the US plus one from Osaka in Japan on that same jaunt. As you can imagine due to the less than seven month timescale across the gigs featured, the set list remains very similar and relies heavily on the bands debut release including ‘Too Drunk To Live… Too Young To Die’, ‘Kree Nakoorie’, and the ever popular first single ‘Hiroshima Mon Amour’ which appear on all of the discs and flip side of that first single (it was released as a double ‘A’ side), ‘Island In The Sun’ and Jet To Jet’ featuring on all bar one. The Alcatrazz tracks are augmented by a good helping of moments from Bonnet’s productive career so far, and features across the set ‘Since You Been Gone’, the stunning ‘Lost In Hollywood’ and crowd pleaser ‘All Night Long’ from the Rainbow catalogue alongside the epic ‘Desert Song’ from the MSG days and GB solo hit ‘Night Games’. Malmsteen gets his time in the spotlight via a range of excellent solo showcases, mainly based around his ‘Evil Eye’ show-piece but also leaning on his J.S. Bach influences which supplied a high point at every Alcatrazz show at the time. As you would expect from the title the sound quality across this set is far from the perfect soundboard clarity, and if that is what you seek then you should check out Live Sentence the official live release from the Nakano Sun Plaza show in Tokyo from the same tour. For completists, however, this is a great document of Alcatrazz at their peak and featuring Malmsteen who would be replaced by Steve Vai by the time of their next recording, 1985’s Disturbing The Peace. Within this set the best disc is the one featuring the show from Osaka in January ’84, as well as the sound being a notch above the others it also has the full set of 16 tracks and the crowd response is audibly more enthusiastic especially during the closing run through of ‘All Night Long’ with its Bonnet/Blackmore style vocal/guitar duel harking back to Monsters Of Rock at Donnington in 1980. Alongside the live tracks disc five also includes a few curiosities in the shape of a short 1983 interview with the band, an ‘Against Drunk Driving’ public service announcement narrated by Bonnet featuring ‘Too Drunk To Live… Too Young To Die’ briefly and three instrumental/demo tracks which are surprisingly effective.

With more live takes than the previous six disc set, which only included three shows plus loads of demos and rehearsal material, this is sure to be at least as popular as its predecessor which sold out very quickly following release. Therefore this latest instalment is bound to be eagerly anticipated by the many Alcatrazz, Graham Bonnet and Yngwie Malmsteen collectors.

Yngwie obviously went on to great things while Alcatrazz have gone through many twists and turns over the decades and even broke up at various points since their mid 80’s heyday. Despite the Bonnet/Waldo/Shea line-up releasing a new album in 2020 (Born Innocent) currently two versions of the band exist one fronted by Doogie White with Waldo and Shea (who released V in 2021) plus from time to time a Graham Bonnet led version of the band take to the stage to perform live. What this set proves is that back in the day they deserved all of the success that they achieved across the US and Japan and Alcatrazz really were a force to be reckoned with.

2. Too Young To Die…Too Drunk To Live

6. Island In The Sun

3. Too Young To Die…To Drunk To Live

8. Island In The Sun

1. Too Young To Die… Too Drunk To Live

4. Island In The Sun

6. Since You Been Gone

2. Too Young To Die…Too Drunk To Live

5. Island In The Sun

1. Too Drunk To Live…Too Young To Die

2. Island In The Sun

7. Since You Been Gone Bonus Tracks 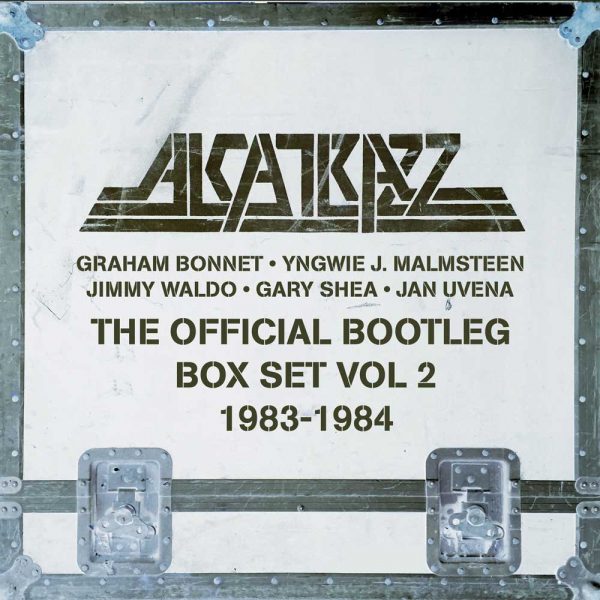