The original Disturbing The Peace recording was the work of Graham Bonnet’s hugely talented band after Yngwie Malmsteen had been sacked and Steve Vai recruited. The other band members, Jan Uvena, Jimmy Waldo and Gary Shea had previously seen success with Alice Cooper and New England. Legendary producer, Eddie Kramer was hired. It was 1985. Expectations were high.

It’s not hard to figure out what went wrong. A major tour and heavy promotion might have helped what is a distinctly average affair gain some traction, but the label apparently knew better and skipped out through the back door. Most, but not all of the songs display Vai’s limitations as a songwriter. Even Bonnet’s uniquely wide baritone/tenor vocal range struggles to sustain the snowcapped high notes in some of Vai’s ambitious melodies. The most gracious critic and the most ferocious fan would have to admit that the duo’s grasp is equal to their reach on only a couple of tracks. On ‘Mercy’, a tightly structured riff perfectly frames Bonnet’s road-tested Rainbow persona. ‘Desert Diamond’s histrionics and theatrical arrangement kill what could have been a fine melodic metal ballad. Yet on the very next track, ‘Sons And Lovers’, the writing and performance is sharply cut and precisely tailored. Bonnet seems more confident and more at ease with this less elaborate but just as ambitious attempt to nail down down an elusive, operatic style of rock. Elsewhere and too often the songs seem abandoned and adrift in no man’s land, labouring in the shadows of the band members’ previous employment.

This repackage then adds a punchier, edited down version of ‘Will You Be Home Tonight’ and 8 instrumental demos of the tracks that made the final cut – bizarre additions you might think, but one that completists will swoon over.

Disc Two is a DVD. A recording of the band’s 1984 gig in Tokyo’s Shinjuki Stadium.

On stage, they gel, no question. The set is a mix of songs from Disturbing… and the previous album, No Parole From Rock’n’Roll, the one with Malmsteen. It is an unfortunate (but perhaps unsurprising) turn of events, as it confirms, in emphatic style, that the Malmsteen version of the band was infinitely superior, at least in terms of songwriting quality. ‘Hiroshima Mon Amour’ and ‘Kree Nakori’ are powerful weapons to deploy in any band’s setlist armoury, here they sound truly magnificent, custom built stadium rock songs, with either Vai’s stretched out notes or Jimmy Waldo’s keyboard cadences swirling around the overhead gantries, looking for a place to land. Add in ‘Night Games’ from Bonnet’s 1981 solo album and the real biggie, ‘Since You’ve Been Gone’, the one wiv Rainbow, wot made him famous, and you have roof-raising noise levels readily emanating from an appreciative crowd.

By the next album, Dangerous Games, in 1986, Vai had jumped ship to join David Lee Roth’s band, and had been replaced by ex Axis and Alice Cooper guitarist, Danny Johnson. Malmsteen and Vai had lasted one album each. Johnson was a decent guitarist with little gift for calibre songwriting. Richie (Iron Butterfly/ Steppenwolf/ Alice Cooper) Podolor was brought in to produce, but the critical and commercial failure of Disturbing… was taking its toll. Dangerous Games is insipid and uninspired, it sounds earnest, but it has no edge. It is a drowning man clutching for a lifebelt that is just of reach. Only the title track and ‘Ohayo Tokyo’ provide a sense of how good the band could have been.

Eight bonus tracks – essentially a short live gig on long Island in 1985 – are a tempting prospect for fans of the band, but beware, the recorded sound quality leaves something to be desired. Still, for a generation weaned on Protools flatpack assembly, these eight tracks will be a revelation. They reveal the real charm of live music, rawness, realism and dependence on real talent. Bathed in sweat and pooling their undoubted team talent, Alcatrazz unwittingly spin gold from base metal. 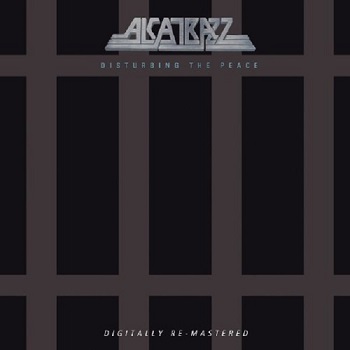 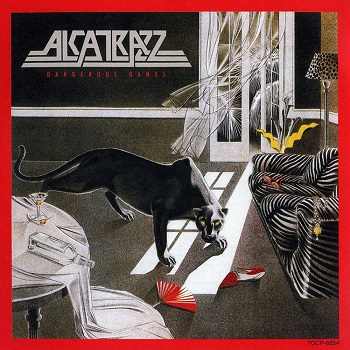