Essentially a stage show, The Dark Age Of The Dragon was performed in sold out arenas all over Germany and Switzerland at the back end of 2016. It is the fourth chapter in French born Alan Simon’s “Excalibur” series. The CD releases/ studio versions of the first 3 have gone gold and platinum, so the popularity of the concept is not in doubt.

Surprisingly then, that concept, judging by Excalibur IV, doesn’t transfer well to CD. The songs seem disconnected, with no real narrative thread. Some lyrics are in French so that’s unhelpful. That’s the bad news, the good news is that it avoids the attendant pretensions of rock opera, and musically, much of the album exists independent of the story.

And that works because these tracks – these individual pieces of music – are tailored to the strengths of Alan Simon’s songwriting and his producing and arranging skills. The lush arrangements and rich instrumentation on ‘Calling For God’ and ‘Silver Moon’, both sung by Moya (Clannad) Brennan, give flesh to Van Dyke Parks’ claim that “a good arrangement transcends the mathematics of melody”. It probably helps that Brennan’s voice has all the emotional range you need to tell any story.

‘The Wings Of The Dragon’ and ‘Alone’, the first unrestrained by convention and shrouded in tubular bells arrangements, and the other glowing in the soughing strings and soft focus romanticism of classic French popular music, are at the other end of the musical scale.

And as you look around the rest of the album, shining light into hidden corners, you joyfully expose the silky strings and folky guitar arpeggios of ‘Dreamers’ (and Bernie Shaw emoting gracefully), or John (Supertramp) Helliwell’s haunting sax, ghosting through Jesse Siebenberg’s desolate, heartfelt vocal on ‘I’m Not The Only One’.

It’s rarely an obvious album, Simon’s unexpectedly wide range of styles and approaches form the backdrop to some interesting performances. Some dramatic – Sonia (Curved Air) Kristina’s seductively soft centred vocal on Simon’s ‘Passion’ is perfectly pitched. Some earnest – Simon’s vocal interpretation of his own song, ‘You Don’t Know’, lacks the necessary emotional engagement. Some playful – Martin (Tull) Barre’s guitar and John Helliwell’s woodwind combine masterfully on this celtic romp… you can imagine an enthusiastic audience dancing in the aisles to this one. Maybe not.

Elsewhere, and a bit too often, the material simmers rather than sparkles. But when you examine this closely, the reasons are in the lyrics – these tracks are links in the narrative, rather than significant moments in the story.

The open minded rock fan will find something in The Dark Age . . ., and it’ll be good to know there is a back catalogue, albeit a small one, to pursue. 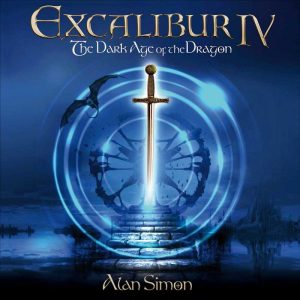