Should you not have been a fan, aside from the evergreen ‘Year of the Cat single’, what might you know of the troubadour Al Stewart? That he made his bones, at the now famous Les Cousins Folk Club back itself in the sixties? That he was born in Glasgow, Scotland? That last one always threw me with his precise diction being so English in its mannerisms. The extensive booklet that comes with this collection explains that and many other matters concerning the man’s career. While born up north, when a child his widowed mother moved to Dorset, and one gathers he was later privately educated. A different story from the mythos the likes of the late John Martyn would have us know.

That Time Passages, first released in 1978, was a platinum album, proves quite shocker. Did fashion demand punk give way to new wave so quickly and we forget all that had gone before? Not in the USA it seems, where Al Stewart continued to have a series of hit singles for a while. Still active to this day, long-term fans obviously faithful but for such collections as this to come along assumes a growing interest from new listeners for his back catalogue.

There’s a 3CD/DVD Deluxe Edition Box set available, but the 2CD version I have for review is more than adequate for those of us less familiar with Stewart’s work. It opens up in wide gatefold manner, bearing not only the original album’s cover artworks, but the aforementioned booklet featuring photos and interview on the one outer packet sleeve and a facsimile of a promotional poster of the time on the other.

Stewart’s penchant for historic narrative is given full measure across the length and breadth of the main album. Often, he weaves facts and impressions of times gone by with the more personal aspects of his own life, as quiet and thoughtfully introspective as they might be. The music at its mildest a kind of soft rock by way of John Lennon, where more fluid and atmospheric in its arrangements bridging the Canterbury side of progressive rock with the more wistful contemplations of say Leo Sayer.

It’s of its time; in much of its scope, production sound (by Alan Parsons) and ambition. For the most part, it is still quite relevant. That his songs often touch on personal feelings as well as delicate and otherwise interactions with others is a damn sight deeper to my mind than the mindfulness attributions of today’s various media celebrities that cause me to raise an eyebrow in disbelief at what I perceive for the most part to be ingenuity. Better to take the rough with the smooth, sit back, chill with a glass of wine and soak in an album stirred with genuine emotion.

Electric piano guides into the title track, a soft rhythmic hook and the lines “It was late in December, the sky turned to snow,” draw the listener in swiftly, a saxophone weeps round the edges of the song warmly, and but a bar or two later when he sings “Well I’m not the kind to live in the past,” has us playing the Doubting Thomas, we’ll accept we can learn from our mistakes and wonder what ones are concerning the singer right now. The song remains one step from melancholy, memory lane traversed in a Spanish guitar solo, a jazzier one blown on sax, then sweeping up in more profoundly with a fuller orchestrated sound, varying in arrangement and at over six minutes long not outstaying its welcome as thematic overture to the record as a whole.

While ‘Time Passages’ spoke of Christmas, this time the opening piano line evokes the sound of falling snow, but it’s soon into a soft bouncy rock and roller in ‘Valentino Way’. A tale of a lady who’s left and bid a presumed friend goodbye, while in my mind’s eye I’m picturing that John Cusack/Kate Beckinsale film Serendipity. Musically, I’m in mind of Caravan with Camel’s Andy Latimer guesting on the guitar solo, albeit it’s Stewart frequent collaborator of the time Peter White.

‘Life In Dark Water’ is a different proposition. Slower, more eerie, like one of those old public health TV adverts that used to warn about the dangers of waters, it also invokes music hall variety aspects and an understated guitar solo symphonic in structure. A tale of disillusionment. In recent years the Downes Braide Association has been producing music like this under a progressive pop guise.

‘A Man For All Seasons’ finds us stoically in historical form. Pageant like musically prior to power chords as female backing vocals building the piece. A fine lyrical guitar solo dances with a subtle sustain, giving way to piano. Not simply relating the events of Sir Thomas Moore and his stance against King Henry VIII, but questioning what his feelings might have been, then latterly stating the wider implications of religions as a whole (back in those relatively innocent times of the late 70s).

‘Almost Lucy’ comes as much needed emotional release. Its good time Mediterranean vibes as if Kevin Ayers had downed a couple of bottles of wine to revise Peter Starstedt’s Where Do You Go To (My Lovely)’.

Based musically on ‘The Earle of Salisbury’ by William Byrd (and so possibly why it feels reminiscent to various TV series of the time) ‘The Palace of Versailles’ proves serious lyrically and musically yet is somehow spiritually uplifting even as it seems to question what good the French Revolution did for the common Gallic man. ‘Timeless Sky’ mingles perceived narratives from the opening two tracks, lightly European folk musically, with White playing.

‘Song On The Radio’ again finds us in that Caravan/Camel pigeon hole, but flies out into LA territory, if not quiet Steely Dan in that wider screen ballpark, Phil Kenzies’ alto sax giving free rein, Stewart’s lyrics needing no interpretation in their expressiveness of intimacy. Ironic then, that Stewart had written it tongue-in-cheek when record company boss Clive Davis asked him to write a follow-up hit to ‘Year Of The Cat’. As Stewart notes in the booklet, the joke was on him, the single version became a Top 30 hit in the USA.

That ‘End Of The Day’ follows it in the same vein but with a deeper lyrical intimacy is interesting; a classical guitar constructed number to quietly serenade one’s lover with it concludes the original album nicely. For this remastered collection we also have a Cajun styled shuffling boogie of sorts in c as bonus track.

The second CD I have for review features single versions of ‘Time Passages’ and’ Song On The Radio’ and broadly speaking they’re edited versions of the album tracks. The four demo tracks aren’t just filler it has to be stated, works in progress it’s interesting to hear the differences and speculate why things might have been tried out one way though I’m mostly in agreement with the changes found on the eventual recordings.

The early version of ‘Tonton Mactote’ is more rock ‘n roll fuelled’ and preferable to me, presumably they developed the finished version to fit more in line with the overall album’s sound, but characteristically eventually decided it a weaker number and left off the vinyl edition. ‘The Palace of Versailles’ is a gentler rendition, less student rebellion in approach, and bears a different guitar solo worth hearing. ‘The Hollywood Sign (On St. Stephen’s Day) (Timeless Skies)’ another softer suite in progress – We’re informed in the booklet that Stewart would write various reams of lyrics then chose which worked best. ‘Life In A Bottle’ never made it to the final sessions. It evokes an earlier 70s sound, not too different from Badfinger, and frankly could have been a minor hit if recorded a few years earlier.

I’ve had the opportunity to hear live tracks featured on 3CD package aside from those you’ll find listed on the 2CD track listing below. The evolution from demo to definitive recording to song lived-in live is worth experiencing. The band featuring most of those on the album are well honed players in tune with each other and blending their talents towards interpreting the songs collectively. The biggest criticism live might be that the female backing vocals tend to be a little high in the mix. Tracks like ‘Valentino Way’ have become road-worn, well lived in, the band rollicking away from beginning to end, and Stewart’s voice clear and bright throughout all these onstage versions. ‘The Pink Panther Theme’ is a full swinging sax solo that follows on from an epic ‘Year Of The Cat’ featured on the full box set version, and leads proudly into ‘Song On The Radio’.

While musically not for everyone, the standard of playing is exemplary throughout, and you can’t fault the work that’s gone into creating these collections. Personally, it has got me much more interested in Al Stewart as a composer, and I’ve keenly been investigating his back catalogue since. 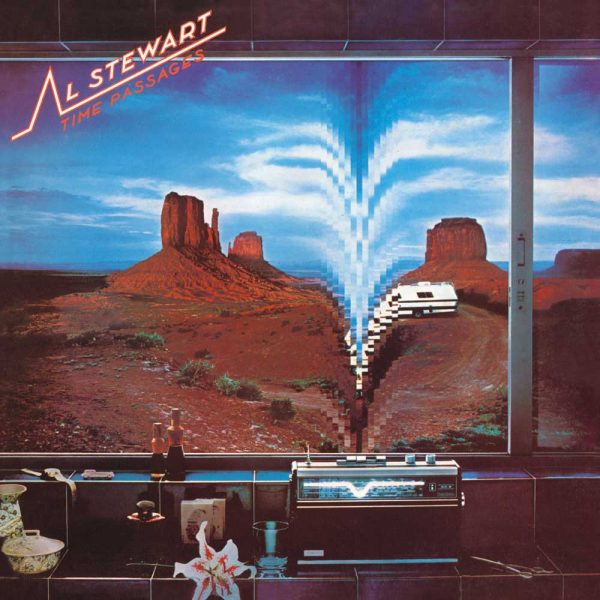