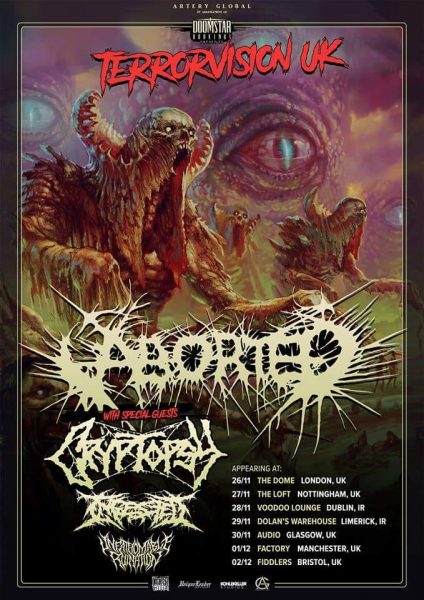 Another Monday night under a rainy London sky and another gig at The Dome. This time metalheads from the capital and beyond gather together in a celebration of death metal’s finest; a four-band sledgehammer of a bill headed by the legendary Belgians’ Aborted. It is perhaps the busiest I’ve seen the Tufnell Park venue in the past six months, filled to the brim with enthusiastic newbies and veteran fans alike, collectively gathered for the opening night of this TerrorVision UK and Ireland tour.

Having just made it in time to catch the final flurry of hefty punches from Ingested attention quickly switches to Cryptopsy, who have just released their EP The Book of Suffering – Tome II (a sequel to 2015’s Tome I ). These death metal veterans offer more than your average layer of crushing complexity. It’s fast and heavy and headbangingly brilliant. But what makes the men from Montreal really stand out is their underlying nod to groove and jazz, with string bends and bluesy riffs caressing the vocals of Matt McGachy like a devoted parent.

In parts, you can easily imagine guitar parts replaced by the saxophone. But they are also a band of unrelentingly brutality, McGachy announcing that they’d be ending their set with ‘Orgiastic Disembowelment‘. This song highlights the crazy skills of guitarist Christian Donaldson, fingers running up and down the frets like a magical musical wizard. But then come the breakdowns….. turning the room into a huge headbanging ritual, everyone rocking backwards and forwards as one giant demonic entity.

And then come Aborted; death metal royalty. It takes me a while to spot the glass coffin positioned on the stage. What is in it? Something which appears a cross between ET and a decaying corpse…. With the flashing green strobes that continued throughout, I decide on the former. It definitely had an element of alien about it; an extra-terrestrial life form distilled in a Frankenstein-style casket filled with water, ready for experimentation.

The last time the Belgian death metal crew were in the UK was a couple of years ago, touring with the Teutonic thrash titans, Kreator. Tonight, Aborted are in no mood to play second fiddle to anyone.

Sven De Caluwe is an extraordinary frontman, with a neck even thicker than Corey Taylor’s – his headbanging so violent it’s almost as though he is trying to snap a piece of wood in half with it. His voice is like a siren live, a howl straight out of The Odyssey, luring the innocent to face impending doom. He marches up and down the stage, commanding with authority – the alien entity lurking behind him unacknowledged. Aborted have just released their new album TerrorVision, a dramatic score exploring the horror of humanity. With a increasingly complex sound, clever guitar work and inventive pace changes, they have gone from strength to strength.

They open with the new album’s title track, a song which nods towards Orwell’s 1984, full of fast and heavy guitar work. But then songs like ‘Hecatomb’ and ‘Retrogore’ are completely different – experimenting with slowed down, almost doom-esque riffs, with vocals that border on black metal – melodic and torturous. Aborted close the evening with an encore of ‘The Holocaust Incarnate,’ released almost 20 years ago – a torturing exploration of war and misery told through the most extreme and headbang-worthy guitar breakdowns of the night. As Sven aptly declares: “This is the best Monday night I’ve had in a while.”