Stepping up to the big leagues

On 5 October 2018, Allan will be telling as many people as possible about this album…

There’s something about finding a new band that makes your skin tingle and the hairs on the back of your neck stand up. Finding one that’s a few albums down the line and churning out the kind of stuff you like that’s in short supply is like an early birthday present. So when I get offered the chance to review an album by a band that are described as blurring the boundaries of rock, metal and electronica, I’m always going to be hopeful despite the sector often being what I shall politely call ‘hit and miss’.

Into this arena steps A Primitive Evolution, a Canadian three-piece ensemble now releasing their third album. They’ve been around as a unit since 2007, and have already been featured in films, a vampire musical, and several TV shows. Now signed to Metropolis Records alongside a raft of my favourite industrial artists, they’re stepping up to the big leagues.

So, how does the album sound? Well, while an instrumental intro track usually makes me roll my eyes, in this case it leads and builds up to the first track proper – and ‘Who’s Your Maker?’ hammers in the metal side of things very neatly and sets up the tone for what’s to follow. Big dirty riffs are very much the order of the day, with tracks like ‘Close Your Eyes’ opening up with some big chunky guitar work. But the thing that’s so good about this album is that it’s not a one trick pony – and as if to prove the point, the track morphs into some very pretty acoustic work underpinned by a running bassline that propels the song along brilliantly. It’s almost balladic, with a soulful, soaring vocal weaving a tale of hope over the top.

In terms of comparisons to earlier albums, they’ve very much retained the ability to blend the softer side of things with the heavier guitar work without losing the song in the process. I’d say it’s overall a heavier sound, and they’ve also stepped up the electronica component somewhat to come up with something that definitely a change in tonality, but without losing the essential character of the band themselves.

One of the best tracks on the album is single ‘Becoming’, in which the three piece band manage to sound like a much larger ensemble throwing down chunky, dirty rock’n’roll with vocals veering from soft and soulful to full-on screaming punk. My favourite, though, is probably the last track on the album ‘Echo’ which evokes so many of my favourite goth-industrial bands without ever quite sounding like enough of any of them for it become a pastiche. Overall, it’s a confident mixture of heavy and mellow, hard and soft, and brings something new to the table. Worth a listen now, and definitely worth keeping an eye on them in the longer term, too. 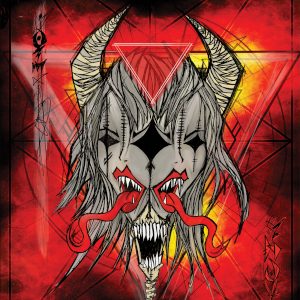