Few so called “Supergroups” are more than an unrecognised blip on the general public’s music radar. But if A New Revenge isn’t a Supergroup, then it’s the nearest thing that four battle hardened, road tested, incredibly successful musicians are ever going to get. Separately, Tim (Ripper) Owens, Keri Kelli, Rudy Sarzo and James Kottak have been members of every known rock band in the Western world, and ANR would seem to have evolved from The Rock Project, a loose knit group put together by Kelli in 2013, featuring all four.

It’s not what we expect. Owens demonstrates his multi octave versatility, adapting his voice to the FM Rock Radio tone demanded by these modern Arena Rock songs, but it’s guitarist/writer/producer Kelli who wields the major influence here. The sonics are very contemporary, an immense Pro-tools construct, and the band do a persuasive job of matching substance with style. There are plenty of memorable melodies and heart stopping hooks, all hermetically sealed within Kelli’s studio bubble. Imagine The Big Bang Babies’ 1989 album, 3 Chords And the Truth produced on a mega budget, aimed at the USA’s Generation Z, with Mutt Lange 2.0 at the studio helm.

And so producer Kelli steers the starship through the tightly processed sonics of ‘The Distance Between’, accelerating through epic, post millenial rock songs, ‘The Way’ and ‘The Eyes’, both alive with stinging riffs, layered choruses and Kottak’s cascading drumsound. ‘Glorious’ and ‘Never Let You Go’ are eminently melodic, one rushing gleefully into a towering edifice of a chorus, while the other, fuelled by a heavily disguised Bo Diddley beat, toys teasingly with Glamrock tropes.

Then, just as you worry they might run out of ideas, the album peaks with the darkly tongue in cheek, Alice Cooperish ‘Only The Pretty Ones’. A Grand Guignol psychodrama that cuts to the heart of the band’s music without undermining what came before or indeed, what comes after. Especially the title track, which isn’t far behind in terms of album standout status. It shifts the machine up a gear (or three), powering into that tough as teak, precision hard rock territory so ably patrolled by bands like Buckcherry and Velvet Revolver.

It just confirms the notion that Enemies & Lovers is indeed a strange brew. Heavy Metal, Poprock, Glam Rock, Hard Rock are all thrown into the mix. An album full of tightly structured songs rooted in the eighties, all transformed for the here and now. Quite an achievement. 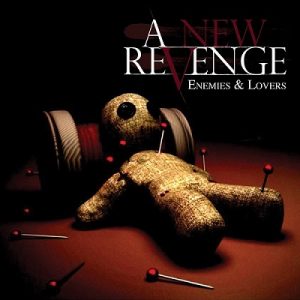