Hail, hail rock ‘n roll. Atlanta noise duo ’68 are back with their third album, a bluesy shot of badness that goes by the name of ‘Give One Take One’. The above video coupled with the mention of ‘blues’ and ‘duo’ might just bring The White Stripes to mind but when one member of this particular duo is Josh Scogin, formally of metalcore faces Norma Jean, you can expect something different, something…more.

“I got a back pocket full of riffs, you stick around to see ’em all” howls Scogin seconds into the brilliant, trashy ‘Bad Bite’ (see above). And that pretty much encapsulates the sound and ethos of the album. Riffs, and lots of them. Rock and fucking roll with a capital R, well, two R’s (with an ‘N’ in between). Noise, distortion, twang, vocals taken to the brink of collapse. Blood, sweat, tears and pretty much all the other bodily fluids are present and correct. This album leaves it all on the studio floor, and pity the poor Joe who has to clean it up.

It’s an almighty noise for just two people to create – guitars, bass, keys, electronics and utterly manic Keith-Moon-meets-Buddy Rich-via Animal-from-The-Muppet-Show drums courtesy of Nikko Yamada, and kudos to the both of them, they create the sound of seven men (good blues number, seven).

Opening track ‘The Knife, The Knife, The Knife’ sets up the song structure for the album. An unpredictable, ever-shifting kaleidoscope of amped up, fuzzed up guitars, strange electronic effects, manic drums and riffs that just don’t sit still – they speed up, slow down, morph, collapse and eventually come back pretty much intact but, y’know, much fucking louder. Not that they were quiet to begin with. Vocals are of the bug-eyed, throat shredding Jon Spencer variety, only possible to achieve while maniac dancing, rolling around on the floor or testifying on your knees. Commitment isn’t lacking here, nor is utter devotion to the cause of rock ‘n roll.

And on it goes. There is a definite early Stooges vibe. There’s twang – surfabilly, Link Wray twang, distorted to the max but looking back to ‘Wipeout’. There are instrumental breakdowns and lot’s and lot’s of serious noise. White noise, howling at the moon, 80’s Dennis Hopper, head stuck in an Orange amp noise. As already mentioned quite a lot, it’s rock ‘n roll, but with some seriously anti-social tendencies and a mathematical complexity. Sonic Youth meets The Blue Magoos.

‘What You Starve’ brings a dash of greasy funk to the party while ‘Lovers In Death’ is a beast of a thing – it’s grungy cloak creating a noisecore/Nirvana mash-up. This is a thing of ill-intent, brandishing a barely concealed weapon. “Rock n roll never gave me a thing” howls Scogin defiantly.

‘Life And Debt’, meanwhile, is a stand out. There’s reverb, volume, squalling background electro FX but, amidst it all, is a melody from a little left of heaven. It’s original, almost poppy riff drops out into some drawling, dusty Americana before crashing back in a bigger, bolder incarnation. It’s epic – bonkers, huge and glorious, akin to a dangerously fucked up version of a Killers stadium anthem.

We finish with ‘The Storm, The Storm, The Storm’ (a companion to ‘The Knife, The Knife, The Knife’ perhaps? oh yeah, and ‘The Silence, The Silence, The Silence’). Born of a humongously loud guitar wash/drone, it’s saturated with impending menace. Drums don’t appear until almost the 2 minute mark at which point we’re off into a sample-led riff, it’s lyrics repeated ad infinitum until they become a mantra. And then it gets repeated. Shards of guitar circle the riff, creating an unholy sound, an orchestra of fucked up-ness. And then it ends, with a crackle. Brilliant.

This is a triumphant album and without doubt their best yet. The performances and songs are stunning throughout and for anyone in love with the rock ‘n roll world (apologies and thanks to Strummer and Wildheart for the pilfered lyric) it has a bit of everything that makes music great. An album of connections and contradictions, if you’re not playing this at full fucking volume then you shouldn’t be listening to it in the first place. 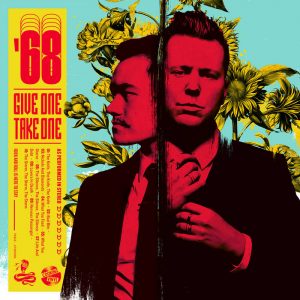