5RVLN5 (pronounced ‘surveillance’) is an industrial outfit led by (and pretty much consisting of) Chuck Clybourne – ex guitarist/vocalist of Doom metal band Faces Of The Borg. He has now turned his dark attention to corrosive, synth-led industrial bleakness. And the results are very good indeed.

Debut album, ‘The Black Mark’ is a joy…well, it’s good. Joy may well be the wrong word to use to describe the aural corruption on display here. It all commences with several minutes of electronic noise and crackly broadcasts. A punishing synthetic drumbeat and distant female Arabic wails join the fray, as does another electronically mangled voice. Garbled radio signals add to the unnerving vibe. The beat increases and the equivalent of an audio nailbomb explodes. Clybourne’s Reznor-esque vocals appear, railing incoherently against…something.

And from here on in the pace and mood don’t falter for a second. The album is only 20 minutes long (album? EP? you decide) but that’s probably about as much exposure to this assault that you could healthily take in one sitting.

‘Flesh’ (see above) has more clanking and vicious shards of guitar. Lara Noel’s vocals harmonise with Clybourne with an odd (considering the surroundings) beauty. It becomes ever more intense and abusive, rising to become a doomed choir of rust. ‘World Of Filth’ contains what sounds like bursts of steam from corroded pipes and chains being dragged across an abattoir floor. Clybourne is clearly not a happy bunny. He rants into the void. Death and insanity stalking his every word. “I want to die every day of my life” he intones amid the unhinged muttering. It’s ‘Taxi Driver’ soundtracked by Skinny Puppy.

The 80’s get a look in with ‘Funeral Song’. It comes on like a ruined Depeche Mode with added John Carpenter synth. There is quite humongous distortion. Crackling, menacing, metal on metal. There are roars of genuine despair, howls of furious anguish.

So, yeah, if NIN are just a tad too cheery for you, you now know where to go for your infected fix of gloom. You might need a shower after listening to this, possibly a stroll and a picnic in a sun kissed field full of bunnies, but this is great stuff. Sure, it’s abused, corrupt, foul and fucked up but, y’know, in a good way. 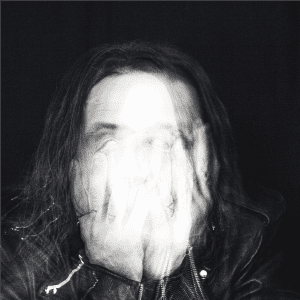