In a country with no rock traditions, Tomosayu Hotei is king. In his homeland, Japan, he is a multimillion selling guitarist, and now he’s come knocking on the door to this hemisphere. He brings with him the undoubted cache of his now famous magnum opus, ‘Battle Without Honour Or Humanity’, used by Tarantino in his ‘Kill Bill’ movie. Anyone familiar with that track’s spare, insistent lick and big band ensemble centrepiece will know that Hotei’s musical style is impossible to pin down. And therein may lie a problem. While much of Strangers pulsates with seductive energy, adorned by surf guitars and punctuated by blasts of brass and stinging rhythmic slaps, it relies heavily on the album’s guest vocalists to gain any real traction.
The most notable of these are probably Iggy Pop, whose abrasive, carefully dispensed vocal contribution to ‘How The Cookie Crumbles’ is perfectly matched to the song’s spare, uncluttered arrangement, and Shea Seger, whose Joplin-esque southern soul shines through ‘Texas Groove’s choppy, restless rhythms. Seger has appearing with Hotei on his live gigs in London recently, to considerable acclaim. It would be ironic if this talented singer/songwriter, who has had her nose pressed up against the glittering shop window of fame for several years now, finds that a guitarist from the Far East provides her with the key to the door.
Elsewhere, on ‘Kill To Love You’, Matt (Bullet For My Valentine) Tuck’s brooding and intensely dramatic vocals are anchored by Hotei’s wiry guitar work, occasionally showing a glimpse of a harder, more dangerous edge. And Richard (Rammstein) Kruspe undeniably mainlines into his band’s sinister, subversive, teutonic rock on ‘Move It’.
It’s all a bit scattergun. Hotei is often an exploratory guitarist, in the vein of today’s Satriani, looking for textures and shading rather than visceral, crowd-pleasing impact. That works well on ‘Medusa’s cultural collision of surf guitar and cinematic orchestration, and on ‘Stranger’s piercing soulful groove, but these attributes don’t lend themselves to natural cohesion. Maybe that’s the point. 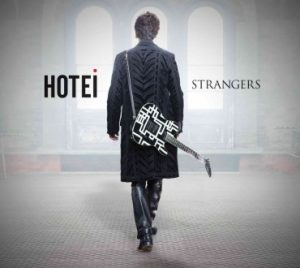 Track List:
Medusa
How The Cookie Crumbles
Move It
Barrel Of My Own Gun
Kill To Love You
Strangers
Walking Through The Night
Texas Groove
Into The Light
Departure
Battle Without Honour Or Humanity