The story of 21 Guns is another familiar tale of missed opportunities, label infighting and bad business decisions. All well documented. Nothing’s Real was the band’s second album, recorded in 1997 – the follow up to Salute, the 1992 debut, and could quite rightly be labelled as Melodic Hard Rock. It had no chance of commercial success back then – the genre, on the ascendant through the eighties – had been forced so far underground as to be truly subterranean. It eventually saw light of day on the fledgling Z Records label. But without major label push it failed to gain any serious traction. Time passes. Fifteen years later it has been reissued with half a dozen bonus tracks by the enterprising Cherry Red Records label, providing the album (and indeed the band) the profile denied it by a hostile post-grunge climate.

And it’s an album that stands tall in any environment, different to Salute, with a darker, heavily guitar driven, classic rock feel, reflective of the musical sea change we associate with the nineties. But it’s also clear that the passage of time had done nothing to cloud the clarity of the band’s musical vision. Founders, Scott (Thin Lizzy) Gorham and talented Norwegian songwriter/guitarist, Leif Johansson recruited ex Psycho Motel/Sons Of Angels vocalist, Hans-Olaf Solli to replace the departed Tommy Laverdi. And while he lacks Laverdi’s distinctive tone, his voice burns with intensity, negotiating the lows with skill and climbing the highs with a chest swelling self belief.

But Gorham is the real star here. His guitar is everywhere, riffing relentlessy over opener ‘No Soul’s fiery groove, whipping up title track, ‘Nothing’s Real’ into a Zeppelin-esque wail; meshing seamlessly with Johansson’s thudding bass to create a clipped, calibrated rhythm on standout track, ‘Underground’. At times it’s a little overproduced, and a little overpowering, like they were trying just a bit too hard, but maybe that in-your-face harshness is simply a remastering by-product.

The surprise package was a cover of the Lynott/Gorham composition, ‘King’s Vengeance’, a song that wasn’t done justice by Thin Lizzy, according to Gorham. 21G’s version tunes into Seventies’ California rock, giving it a folky, guitar&vocal harmony rock feel. Bonus comes in the form of six good quality demo recordings, five from the Salute sessions. ‘The Picture’ and ‘Blood Gone Bad’ turned up on the band’s 2002 album, Demo-lition. Those two tracks plus ‘Cold Heart’, all much more melodic, looser, under-produced by definition (and arguably, all the better for it) are class acts, worth buying the cliché for. 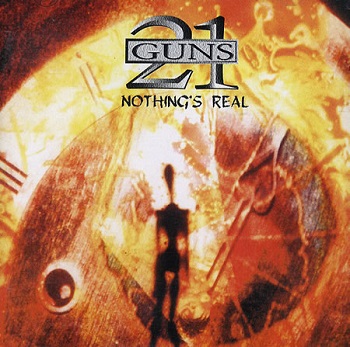